WikiLeaks founder Julian Assange was charged Thursday with conspiracy to commit computer intrusion for aiding Chelsea Manning in the cracking of a password to a classified U.S. government computer, the U.S. Justice Department announced hours after Assange’s arrest in London.

Assange is accused of engaging in a conspiracy with former U.S. Army officer Chelsea Manning in cracking a password stored on a U.S. Defense Department computer connected to a U.S. government computer network for classified documents and communications, the Justice Department said.

Manning was using the computers to download classified documents and forward them to WikiLeaks. Cracking the password would have allowed her to use a different username rather than her own,” officials said.

“During the conspiracy, Manning and Assange engaged in real-time discussions regarding Manning’s transmission of classified records to Assange,” the Justice Department said. “The discussions also reflect Assange actively encouraging Manning to provide more information.  During an exchange, Manning told Assange that ‘after this upload, that’s all I really have got left.’ To which Assange replied, ‘curious eyes never run dry in my experience.’

Assange was officially charged with conspiracy to commit computer intrusion. He faces a maximum of five years in prison if he’s convicted.

Assange was carried out of the Ecuadorian embassy in London in the arms of British police and arrested earlier Thursday, a dramatic scene that ended Assange’s nearly 7-year stay at the embassy and left the world watching to see if the anti-secrecy site would retaliate.

Moments before the stunning arrest, Ecuador announced it had withdrawn Assange’s asylum for “repeatedly violating international conventions and protocol.”

Ecuadorean President Lenin Moreno described the decision to withdraw Assange’s asylum as a “sovereign decision” because of his alleged repeated violations.

“Today I announce that the discourteous and aggressive behavior of Mr. Julian Assange, the hostile and threatening declarations of its allied organization, against Ecuador, and especially the transgression of international treaties, have led the situation to a point where the asylum of Mr. Assange is unsustainable and no longer viable,” Moreno said in a video statement posted on Twitter.

Video of Assange’s arrest showed him with a full white beard, holding an unidentified magazine and yelling something to reporters, though it was unclear what he said.

Ecuadoran Foreign Minister Jose Valencia told Teleamazonas this week that living in the embassy indefinitely is bad for Assange’s “state of mind, his health,” but that Assange has a right to a fair trial and right to a defense.

London’s Metropolitan Police vowed earlier this month to arrest the 47-year-old Australian native if he left the embassy. Assange faces possible extradition to the U.S. for publishing thousands of classified military and diplomatic cables through WikiLeaks. 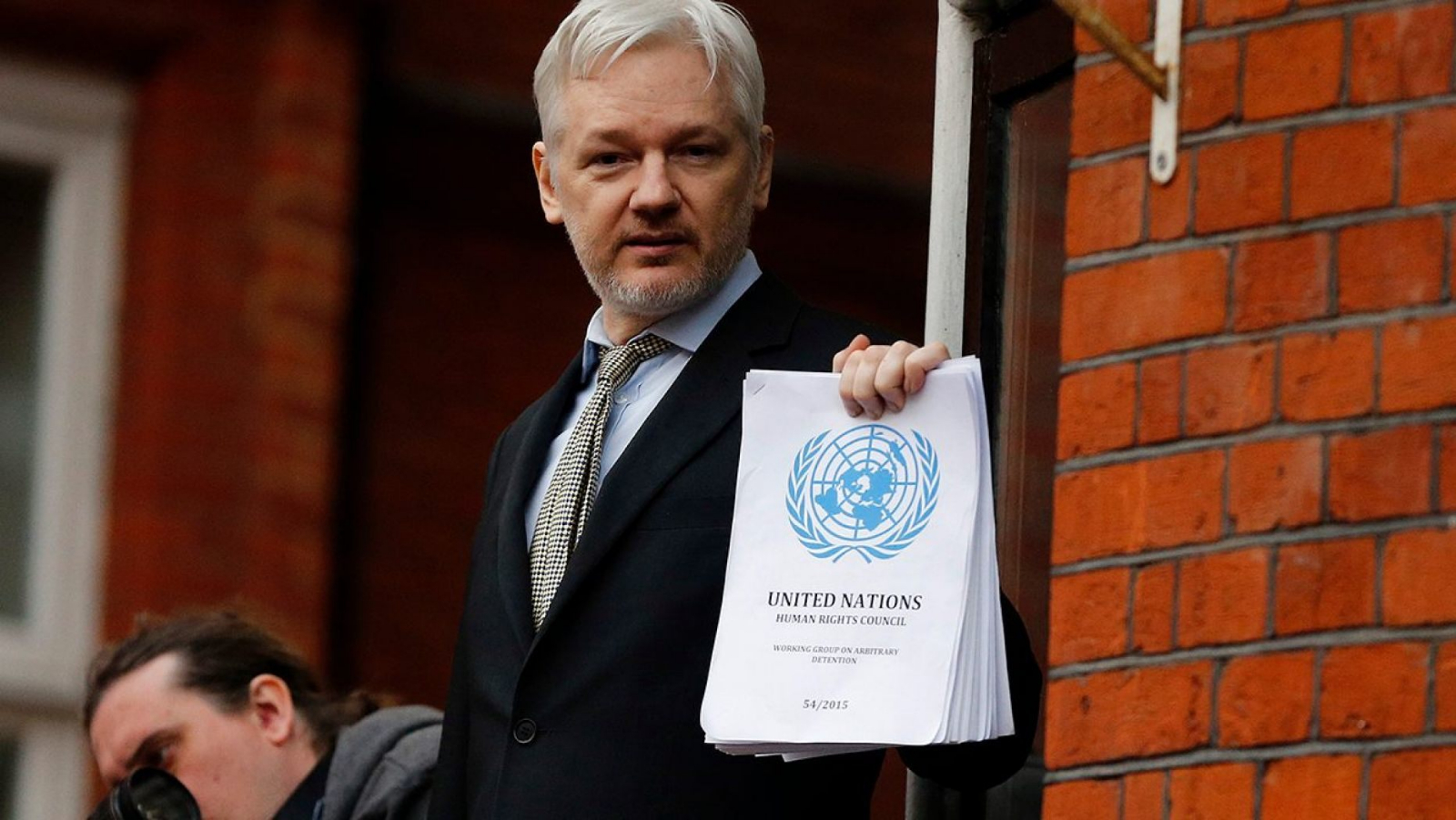 Assange has been in the embassy since 2012 when British courts ordered him extradited to face questioning in a sexual assault case. That matter has since been dropped, but Wikileaks is facing a federal grand jury investigation over its publication of American diplomatic and military secrets during the Iraq War.

British police made the announcement of Assange’s arrest moments after Ecuador decided to withdraw asylum. Jennifer Robinson, Assange’s attorney, said in a tweet Assange was arrested on an extradition request from the U.S. as well as on charges of breaching his bail conditions.

Assange “has been arrested not just for breach of bail conditions but also in relation to a US extradition request,” Robinson tweeted.

Barry J. Pollack, another attorney for Assange, called his client’s arrest at the embassy “disappointing.”

“It is bitterly disappointing that a country would allow someone to whom it has extended citizenship and asylum to be arrested in its embassy. First and foremost, we hope that the UK will now give Mr. Assange access to proper health care, which he has been denied for seven years,” the statement said.

“Once his health care needs have been addressed, the UK courts will need to resolve what appears to be an unprecedented effort by the United States seeking to extradite a foreign journalist to face criminal charges for publishing truthful information.”

The U.S. Justice Department revealed the existence of a sealed criminal case against Assange in a court filing last year. It wasn’t clear what he was accused of.

“We are aware of the reports that Julian Assange was taken into custody by United Kingdom authorities,” Justice Department spokesman Marc Raimondi said.

The arrest drew fierce reaction from people around the world, including WikiLeaks, UK Foreign Secretary Jeremy Hunt, Edward Snowden and even Pamela Anderson.

WikiLeaks in a tweet accused Ecuador of “illegally” terminating Assange’s political asylum and accused the country of violating international law.

“This man is a son, a father, a brother. He has won dozens of journalism awards. He’s been nominated for the Nobel Peace Prize every year since 2010. Powerful actors, including CIA, are engaged in a sophisticated effort to dehumanize, delegitimize and imprison him,” WikiLeaks wrote.

Julian Assange’s lawyers made a statement to the press after Assange’s appearance at Westminster Magistrates’ Court. He has been found guilty of breaching his bail. Video: Fox Business