That shouldn’t be surprising for anyone, when everything they say about the climate is made up lies.

Why is this noteworthy? Well, Rasmus Benestad is supposed to be a scientist, one of the foremost figures in the climate industry in Norway ..

What the animation is illustrating and the comments are saying is that the “Greenhouse Effect” is a bigger atmosphere where CO2 is lying as a blanket making the heat exchange to outer space taking place at a higher altitude and as a consequence of that making everything below warmer.

However, that is not the “Greenhouse Effect” as WWF / Greenpeace a. k. a. IPCC and the rest of the Rent & Grant Seeking Community of activists and criminals are describing it: 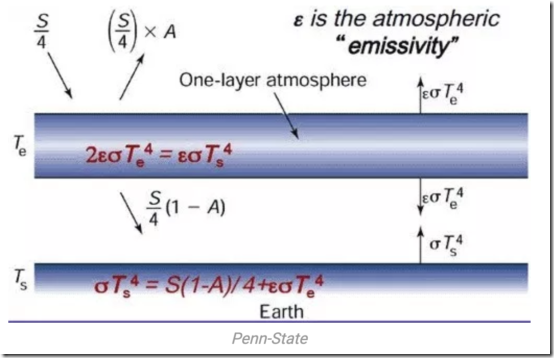 As we can see, the “Greenhouse Effect” is the temperature production spontaneously occurring in the atmosphere (out of thin air) when the incoming solar radiation and the temperature they get when they divide the value by 4 (1370 W/m2 / 4) = -18C. to make it the measured 14,7C. Full explanation

But in this animation the “Greenhouse Effect” is now something completely different. (norwegian commentary).

drivhuseffekten-bergen from Meteorologisk institutt on Vimeo.

Of course, the article is closed for comments. Criminals do not like to be bothered with facts ..