Wikipedia has been ruined by the left many years ago (Climategate II). When it comes to climate and Wikipedia you need – really need! to be skeptical, it’s not enough to be climate skeptic.. 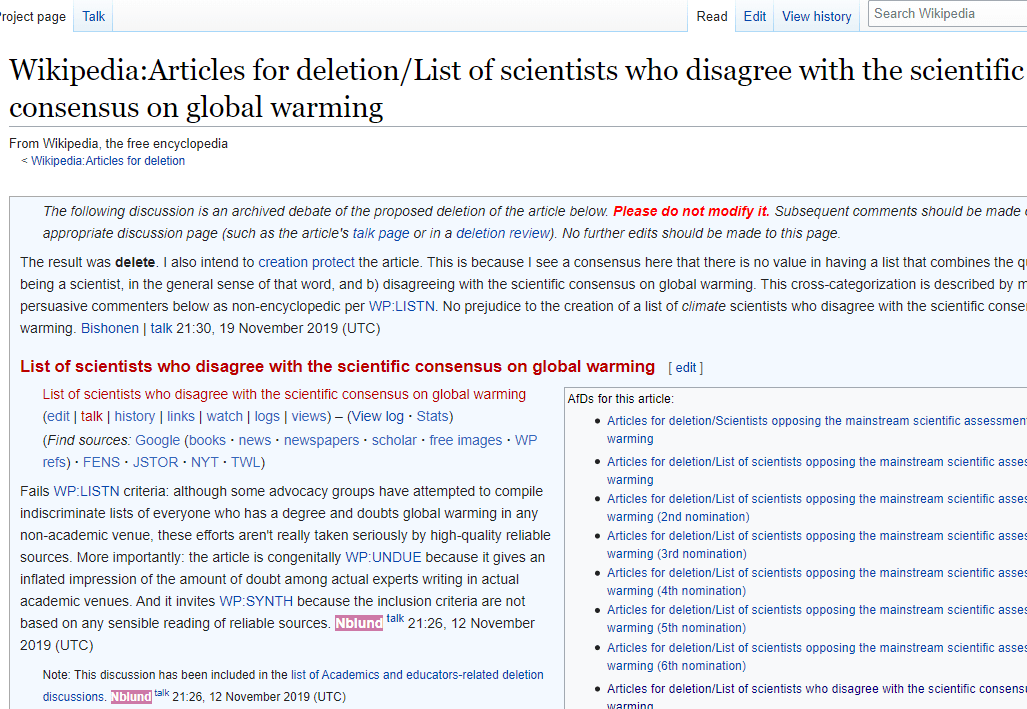 In another disgusting indication of where climate science/debate is at today, a handful of Wikipedia editors have “voted” to delete the immensely useful and topical page: “List of Scientists who Disagree with the Scientific Consensus on Global Warming“…

Here’s the reasoning for the censorship given by one of the Wiki editors:

“The result was delete. This is because I see a consensus here that there is no value in having a list that combines the qualities of a) being a scientist, in the general sense of that word, and b) disagreeing with the scientific consensus on global warming.”

In other words, this decision was apparently taken by a single individual, the ‘Editor’, in Wiki parlance, points out Dr Roger Higgs. His/her “consensus” (ironic choice of word) is based on the online discussion among Wikipedia ‘Users’ at that site (link here), each of whom was evidently asked to vote on whether to “Keep” or “Delete” the page. However, far from a consensus, by my count (please check it) there were 35 Deletes and 19 Keeps. What qualifies the Editor to dictate that 35 to 19 constitutes a consensus, and use that claim to justify deleting a key document on arguably the most important (and most expensive) global social issue since World War Two? 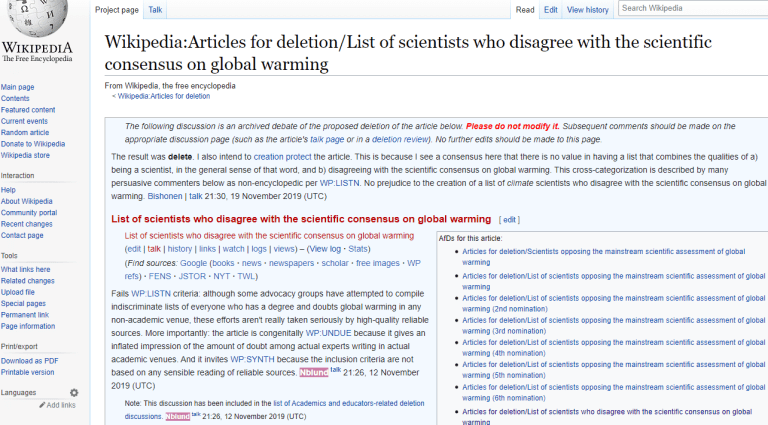 There were a number of sane voices in the mix, however — 19 by my count.

Here is one such voice falling on the side of “keep”:

“KEEP!KEEP!KEEP! Those listed are not noteworthy? “Any utility it ever had is long past?” It’s a list of cranks? Absolute rubbish. There are 4 explicit criteria for inclusion. 1) the individual must have published at least one peer-reviewed research article in the broad field of natural sciences; 2) he or she must have made a clear statement disagreeing with one or more of the IPCC Third Report’s three main conclusions, and 3) the scientists has to have been described in reliable sources as a climate skeptic, denier, or in disagreement with any of the three main conclusions. Additionally, to ensure notability, only individuals with a wikipedia article can be included. Someone advocating for deletion, if the article is a mishmash of miscreants . . . I DARE YOU TO STOP BEING INTELLECTUALLY LAZY! Stop throwing up buzz words like “denialist” and “consensus” which provide you with an unjustified view from your perceived moral high ground. Pick a person or persons you don’t think should be included, actually apply the four criteria and make an argument that they do or do not belong on the list! As for me, I’ve been an editor of this page for a little over a year. By my count, I’ve successfully added seven scientists to the list (I’ll soon be recommending an 8th). . . and I’ve shown my work every time, and those seven met the criteria. And as to relevance . . . the last IPCC report, IPCC 5, seems to have cut its projected warming over the next two decades in half (see IPCC 5 Figure 11.25). And actual observed warming is in the bottom 2.5 percent of the IPCC 3 models’ range. My god, this page is more relevant than ever.”

“You guys are doing very badly. Consider removing your bias. There is no such thing as consensus in science. It is all relative to one’s person’s head. Whereas you may think you are right, there are plenty real climate scientists who know that clima has always changed. I am a biologist and I am not part of this false consensus. Also, you guys use very bad words about people who don’t agree with this ignorance of climate of yours. Bad wikipedia.”

Dissenting voices are key to scientific progress. There shouldn’t be a system in place where some arbitrary (or otherwise) attempt at censorship can be successful on the back of loud “opinions”…

Fortunately, this wiki page formed the backbone of my article: “THE LIST” — SCIENTISTS WHO PUBLICLY DISAGREE WITH THE CURRENT CONSENSUS ON CLIMATE CHANGE (see link below), and so has been preserved, for now at least, until Electroverse is also scrubbed from existence (they’re working on it)…

Dr Roger Higgs concludes by noting the three BBC-style disingenuous omissions in the title alone: “List of scientists who disagree with the scientific consensus on global warming” — (1) these are not just any scientists, but well-known and, in many cases, distinguished scientists (Happer, Soon, Lindzen, etc, etc; see below), in diverse fields of science; (2) they disagree with the consensus on man-made global warming (no educated person denies global warming; Earth has always alternately warmed and cooled); (3) the consensus is only among climate scientists (whose salaries, research grants, and reputations depend on public belief in man-made warming).

More from the loving, just and tolerant left:

Times: Coronavirus will Kill All the Old Climate Skeptics

Climate change is of interest to many young people, and now they have more than one climate leader. Greta Thunberg is well-known for her ‘house is on fire’ rhetoric – an alarmist view of climate; less well-known is German teenager Naomi Seibt who rejects climate alarmism and calls for climate realism. This video explores six points that people often use as evidence of climate catastrophe, but the CLINTEL climate intelligence group shows things are not so black and white. Please read their report: “There is no Climate Emergency”: https://www.yumpu.com/en/document/read/63108553/there-is-no-climate-emergency 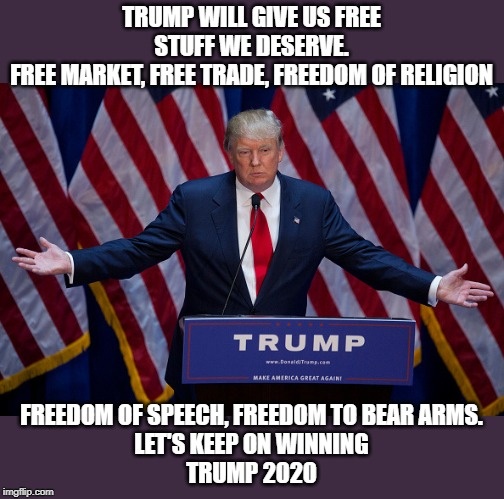