Image: No, Media Alarmists, Lower-Third of Florida Will NOT Soon Be Underwater

How can this be?: Bone-Chilling Cold Sweeps Northeast Russia, Records from the 1950s and 60s Fall

.. and if CO2 is making the atmosphere warmer it would mean the whole atmosphere, right?

.. or is it like everything else by and from the left, – it depends ..

More documentation of how little the left actually understand: 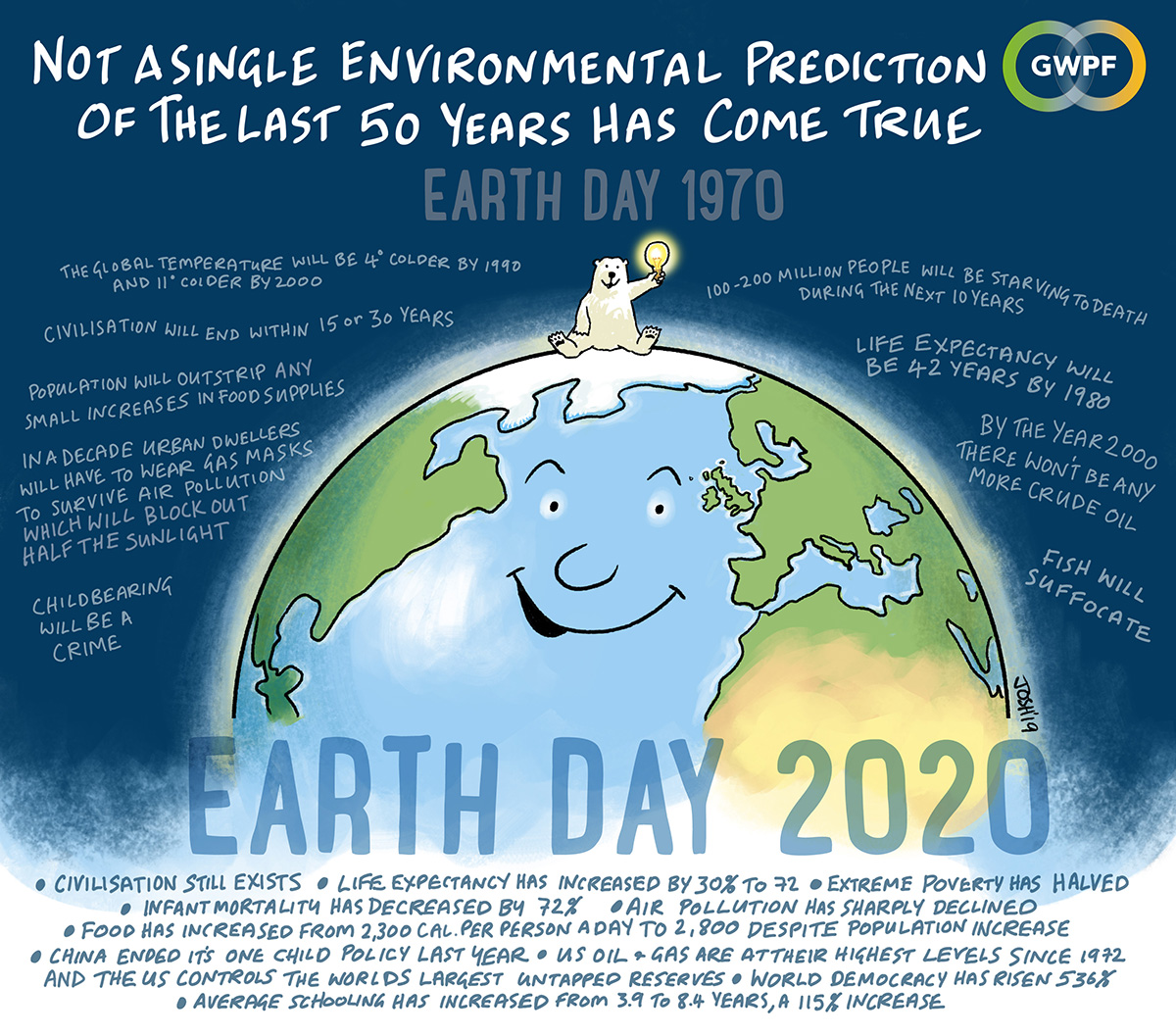 More than three decades before Greta Thunberg was born — the Swedish environmental activist on climate change — more than 20 million Americans participated in the first Earth Day on April 22, 1970.

Considering the current doomsday predictions scaremonger activists are verbalizing about global warming that will result in the demise of civilization within the next decade, many of those unscientific 1970 predictions are being reincarnated on today’s social and news media outlets.

Many of the same are being regurgitated today, but the best prediction from the first earth day five decades ago, yes 50 years ago, was that the “the pending ice age as earth had been cooling since 1950 and that the temperature would be 11 degrees cooler by the year 2000”.

The first Earth Day was celebrated in 1970 — okay, “celebrated” doesn’t capture the funereal tone of the event. The events (organized in part by then hippie and now convicted murderer Ira Einhorn) predicted death, destruction and disease unless we did exactly as progressives commanded.
Behold the coming apocalypse as predicted on and around Earth Day, 1970:

1. “Civilization will end within 15 or 30 years unless immediate action is taken against problems facing mankind.”  — Harvard biologist George Wald

2. “We are in an environmental crisis which threatens the survival of this nation, and of the world as a suitable place of human habitation.” — Washington University biologist Barry Commoner

3. “Man must stop pollution and conserve his resources, not merely to enhance existence but to save the race from intolerable deterioration and possible extinction.” — New York Times editorial

4. “Population will inevitably and completely outstrip whatever small increases in food supplies we make. The death rate will increase until at least 100-200 million people per year will be starving to death during the next ten years.” — Stanford University biologist Paul Ehrlich

5. “Most of the people who are going to die in the greatest cataclysm in the history of man have already been born… [By 1975] some experts feel that food shortages will have escalated the present level of world hunger and starvation into famines of unbelievable proportions. Other experts, more optimistic, think the ultimate food-population collision will not occur until the decade of the 1980s.” — Paul Ehrlich

6. “It is already too late to avoid mass starvation,” — Denis Hayes, Chief organizer for Earth Day

7. “Demographers agree almost unanimously on the following grim timetable: by 1975 widespread famines will begin in India; these will spread by 1990 to include all of India, Pakistan, China and the Near East, Africa. By the year 2000, or conceivably sooner, South and Central America will exist under famine conditions…. By the year 2000, thirty years from now, the entire world, with the exception of Western Europe, North America, and Australia, will be in famine.” — North Texas State University professor Peter Gunter

8. “In a decade, urban dwellers will have to wear gas masks to survive air pollution… by 1985 air pollution will have reduced the amount of sunlight reaching earth by one half.” — Life magazine

9. “At the present rate of nitrogen buildup, it’s only a matter of time before light will be filtered out of the atmosphere and none of our land will be usable.” — Ecologist Kenneth Watt

10. “Air pollution…is certainly going to take hundreds of thousands of lives in the next few years alone.” — Paul Ehrlich

12. “[One] theory assumes that the earth’s cloud cover will continue to thicken as more dust, fumes, and water vapor are belched into the atmosphere by industrial smokestacks and jet planes. Screened from the sun’s heat, the planet will cool, the water vapor will fall and freeze, and a new Ice Age will be born.” — Newsweek magazine

13. “The world has been chilling sharply for about twenty years. If present trends continue, the world will be about four degrees colder for the global mean temperature in 1990, but eleven degrees colder in the year 2000. This is about twice what it would take to put us into an ice age.” — Kenneth Watt

History seems to repeat itself as there will be a disproportionately influential group of doomsters predicting that the future–and the present–never looked so bleak. I guess we’ll need to critique the 2020 doomsday predictions in the year 2050 and see if they were any better than those from the first Earth Day 50 years ago.

This piece first appeared on CFACT.org 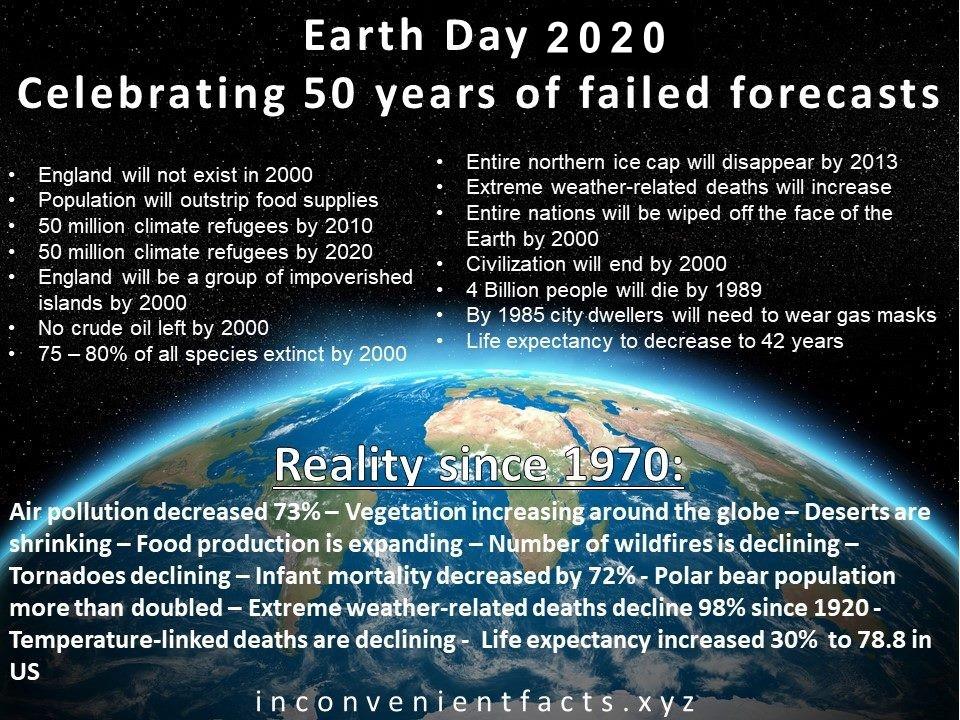 Michael Shellenberger: “In truth, humankind has never been at risk of running out of energy. There has always been enough fossil fuels to power human civilization for hundreds and perhaps thousands of years, and nuclear energy is effectively infinite.”

A new documentary, “Planet of the Humans,” being released free to the public on YouTube today, the 50th Anniversary of Earth Day, reveals that industrial wind farms, solar farms, biomass, and biofuels are wrecking natural environments.

“Planet of the Humans was produced by Oscar-winning filmmaker Michael Moore. “I assumed solar panels would last forever,” Moore told Reuters. “I didn’t know what went into the making of them.”

The film shows both abandoned industrial wind and solar farms and new ones being built — but after cutting down forests. “It suddenly dawned on me what we were looking at was a solar dead zone,” says filmmaker Jeff Gibbs, staring at a former solar farm in California. “I learned that the solar panels don’t last.”  …

“Planet of the Humans” notes that Al Gore personally accepted fossil fuel money in 2013 when he and a co-owner sold Current TV to Al Jazeera, which is state-funded by Qatar, the gas-exporting nation whose citizens have the largest per capita carbon footprint in the world. One year earlier, Gore had said the goal of “reducing our dependence on expensive dirty oil” was “to save the future of civilization.” The film shows Jon Stewart, the host of Comedy Central’s “The Daily Show,” asking Gore, “You couldn’t find, for your business, a more sustainable choice?” “What is not sustainable about it?” responded Gore.  “Because it is backed by fossil fuel money?” said Stewart. More ..