Related: Indonesians turn to sunbathing to ward off coronavirus

US President Donald Trump’s critics scorned his suggestion that disinfectants (including light) might be effective inside the human body in treating viral and other ailments. But it seems POTUS has the last laugh on this medical matter.

Below we shine more light on this emerging medical breakthrough (though used successfully in Russia since 1986).

Intranasal light therapy literally stimulates the blood capillaries in the nasal cavity- it is a very non-invasive method to introduce therapeutic light energy into the human body through the blood. This form of nonionizing radiation on biological systems offers health and medical benefits including effects on cognitive performance, fighting free radicals, combatting Alzheimer’s symptoms and more.

The FDA has approved infrared therapy for everything from eliminating microbes and fungus in the human body to killing cancer cells.

Mitochondria are the key to photo-biomodulation. Mitochondria have a substance called cytochrome c oxidase that can absorb red and NIR light, converting the photonic energy into a form of biological energy called adenosine triphosphate or “ATP.” Cytochrome c oxidase is commonly accepted as a photo acceptor that catalyzes cellular level activity when red to near-infrared red light hit the cells.

The new simple nasal applicator devices replace machines like these below where doctors had to shunt the blood outside the body or to import, through catheter type injection, the agent of treatment, which in this case is coherent infrared laser light. When monochromatic photons of low intensity irradiate blood, the flexibility of red blood cells improves. They separate from each other and can thus receive oxygen across their entire surface area. 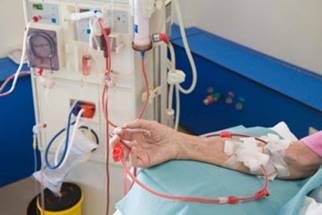 Blood washing back-transfusion therapy and intravascular laser irradiation therapy are costly dangerous medical procedures that can now be done easily, safely and inexpensively in one’s own home. Compared to intravenous laser blood irradiation, nasal laser irradiation for 20 minutes scored 80 % as effective. But if increased to 30 minutes, remarkable 98 % are reached.

Now it is easy to use light to activate the healing properties of the blood. One just clips the applicator in the nose and infrared laser light is applied to the passing blood. Dangerous medical equipment has now been replaced by a little nasal applicator that does not do anything more aggressive than spraying coherent infrared laser light into the blood as it passes by the vessels in the nose. 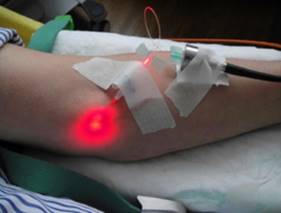 The laser beam footprint targets the nasal cavity, which is rich in blood capillaries. The device parameters have been derived from researching clinical studies on low level light therapy over the last few decades.

Although many researchers now believe that the outcomes between low level laser and the non-laser light emitting diodes (LED) to be similar, the laser light should penetrate deeper into the tissues.

Both types of light are available and the device shown above emits both laser and LED that can be used simultaneously. One can multitask treatment using the laser for the nasal applicator and the LED for treatment of skin problems and problems below the skin.

Why Treat The Blood

Chinese medicine’s definition of Blood is different from Western medicine’s definition. Yes, it’s the red stuff in the veins that nourishes the organs, circulates, warms, heals and the like. However, in the eyes of Chinese medicine, Blood is enlivened with energy (Qi), which moves the Blood through the body so it can nourish every aspect of our body from the skin and muscles to the brain and deep organs. It is the quality of Blood circulating through our systems that helps give us vitality, focus and even rosy cheeks.

When Blood is abundant we feel alive, nourished and well connected. Blood does more than run through our veins and oxygenate cells. It ensures we have nourishment and moisture for the entire body. Blood keeps our tendons, skin and hair healthy, strong and flexible. It lubricates joints and allows for smooth movement. Blood also nourishes the mind and is considered the material basis for mental activity. Strong Blood ensures good sleep and helps us wake feeling rested

Laser energy at 630-640 nanometers is arguably the most effective for irradiation of blood and the vascular wall. Photons at this wavelength are absorbed by oxygen, improve microcirculation, can change the viscosity of the blood and affect vascular endothelium. More than 25 years of experience of using laser energy at 630-640 nm has shown that this waveband directly influences the parameters of all cells in the blood, blood plasma, the coagulation process and all the structural components of the vascular wall.

The treatment, using photons of infrared wavelength improves the rheological characteristics of the blood and microcirculation; with normalisation of parameters of hormonal, immune, reproductive and many other systems. Intranasal Laser Therapy improves the viscosity of blood and profile of lipids thus the treatment is associated with improvements in cardiovascular and cerebrovascular diseases via improvements of the rheological properties of blood. Under laser blood irradiation, anti-inflammatory effects were observed that improved the immunologic activity of the blood.[1]

Low level laser therapy (LLLT) has been investigated and used clinically for over 30 years, mostly in Eastern Europe and Asia. The ability of lasers to cut, cauterize, and destroy tissue is well known throughout the medical world. However, its role at lower power is less well appreciated. The ability to non-thermally and non-destructively change cell function is known as laser bio-stimulation and is the basis for the current use of lasers in a number of medical fields.

Most reports are in Russian and the basis for clinical research and practice was first established in Moscow in 1986. The Institute of Laser Medicine was formed through a union of 14 laser centers from different parts of Russia.

LLLT emerged as a potential therapeutic modality because of the conversion of military production into areas of commercial practice including medicine. The correct wavelength for the target cells or chromophores must be employed (633-810 nm). If the wavelength is incorrect, optimum absorption will not occur and as the first law of photobiology states, the Grotthus-Draper law, without absorption there can be no reaction.

The aggregating property of red blood cells was first described by John Hunter in 1786 and was long considered to be principally of pathophysiologic importance since aggregation is elevated in many disease states; hence the term “blood sludging” coined by M. H. Knisely[2] to describe the phenomenon.

“The apparent viscosity of blood depends on the existing shear forces (i.e., blood behaves as a non-Newtonian fluid) and is determined by hematocrit, plasma viscosity, Red Blood Cell RBC aggregation, and the mechanical properties of RBCs. RBCs are highly deformable, and this physical property significantly contributes to aiding blood flow both under bulk flow conditions and in the microcirculation,” write Drs. Baskurt and Meiselman.[3]

Participants reported better sleep, fewer angry outbursts, less anxiety and less wandering. After the 4-Week, No-Treatment follow-up, some declines were noted. No adverse events were related to the treatments. Results from this controlled study are the first to report significant cognitive improvement in dementia participants following PBM treatments.

Red blood cells (RBCs) exhibit a unique deformability, which enables them to change shape reversibly in response to an external force. The deformability of RBCs allows them to flow in microvessels while transporting oxygen and carbondioxide. Low level laser therapy can affect the physical as well as chemical properties of blood cells which is not only helpful in preservation of blood but also in revitalizing the physically and chemically stressed erytherocytatory membranes. It was determined that the laser therapy decreases the viscosity of blood thus increasing the electrophoreticmobility of erythrocytes. The improvement in microcirculation is a result of all the above factors and dynamics.

Another study confirms that high blood viscosity has been associated with cardiovascular related diseases such as stroke, heart attacks and deep vein thrombosis.

There are numerous examples of light induced photochemical reactions in biological systems. Vitamin D synthesis in our skin is an example of a photochemical reaction. The power density of sunlight is only 105 mW/cm2 yet when ultraviolet B (UVB) rays strikes our skin, it converts a universally present form of cholesterol, 7-dehydrocholesterol to vitamin D3.

The National Cancer Institute says that Lasers can be used to shrink or destroy tumors or precancerous growths. Lasers are most commonly used to treat superficial cancers (cancers on the surface of the body or the lining of internal organs) such as basal cell skin cancer and the very early stages of some cancers, such as cervical, penile, vaginal, vulvar, and non-small cell lung cancer.

The use of intravascular laser blood irradiation can be appropriate during conventional oncological treatments. Dr. Frank Andrä reported that,

“Merely as a result of the sole application of intravascular laser therapy, the quantity of circulating tumour cells was reduced and the patient’s pathological immune response modulated in the direction of the standard. Intravascular laser blood irradiation changes mitochondria morphologically and activates metabolic energy processes.”