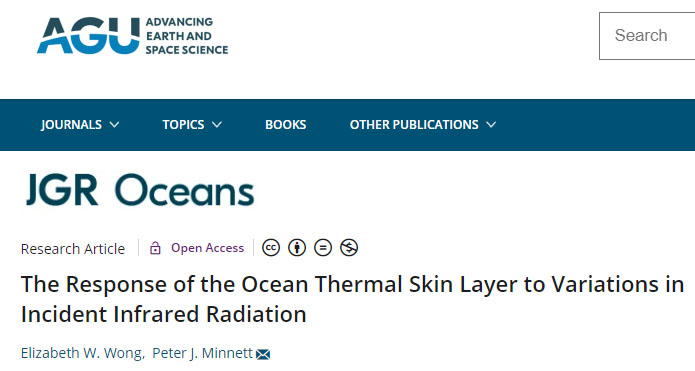 The paper (image, above) by Wong & Minnett is written by climate alarmists. [1] They are attempting to actually measure warming of the ocean from the back radiation from CO2 molecules. They were unable to.

This appears to be the first attempt by anyone to measure potential warming of the Earth’s surface from back-radiation. There were a number of important comments they made.

Wong & Minnett tried to separate the warming of the ocean from direct solar radiation in the visible spectrum, from potential theoretical warming from back-radiation. They found that task not possible.

But Wong & Minnett did determine that the back-radiation of IR EMR only penetrated the oceans to “within the top micrometers of the ocean’s surface”. They were able to determine that whatever effect this was going to have on ocean warming was extremely minimal.

Even if there was a difference between solar radiation and back-radiation temperatures, their instruments were not sensitive enough to detect it.

The whole experiment is in vain. Back-radiation is the Earth’s radiation coming back on itself. It is impossible for the Earth to heat itself with it’s own radiation. That contravenes the 2nd Law of Thermodynamics.

It’s All Over For Angela Merkel’s Climate Agenda