Image: Is there a relationship between global temperature and ocean levels? Sure, but…

The LOONY Left and their Playstation 64 models: Brutal Takedown of Neil Ferguson’s Model

Left-wing politicians have woken up to the fact that  the coronavirus pandemic “would be a terrible crisis to waste,” in the words of Hillary Clinton. Now a group of wealthy Hollywood stars is also capitalizing on the crisis to push a sweeping climate change agenda. 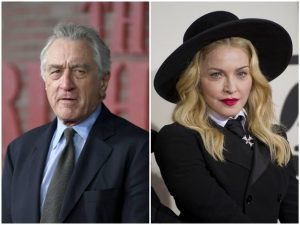 Celebrities including Robert De Niro, Madonna, Barbra Streisand, Jane Fonda, and Joaquin Phoenix have signed their names to an editorial published Wednesday in France’s largest newspaper, Le Monde, demanding a total overhaul of economies around the world in the name of saving the environment and fighting global warming.

“The Covid-19 pandemic is a tragedy. This crisis, however, has an upside in giving us the chance to examine what is essential,” the editorial says. “The ongoing ecological catastrophe is a ‘meta-crisis’: the massive extinction of life on Earth is no longer in doubt, and all indicators point to a direct existential threat. Unlike a pandemic, however serious it may be, it’s a question of a global ecological collapse whose effects will be immeasurable.”

The article, titled “No to a Return to Normal,” was co-authored by actress Juliette Binoche and astrophysicist Aurélien Barrau, who both wrote a similar article in Le Monde in 2018, in which they warned that a massive extinction event was currently underway.

Their new article argues that it is “unthinkable to ‘go back to normal’” following the coronavirus pandemic.

“Consumerism has led us to deny the value of life itself: that of plants, that of animals, and that of a large number of human beings. Pollution, climate change, and the destruction of natural spaces has brought the world to a breaking point,” they wrote.
“For these reasons, along with growing social inequalities, we believe it is unthinkable to ‘go back to normal.’”

A growing number of celebrities have linked the Wuhan coronavirus with climate change activism. Jane Fonda recently called for coronavirus recovery money to go toward green or sustainable energy as well as to efforts to create a “level playing field” for workers.

Filmmaker Michael Moore recently said in his podcast that the coronavirus is earth’s slap in our collective face, adding that the pandemic is nature “trying to tell our species to back off, slow down, and change your ways.”

The Left ‘has attacked’ Michael Moore for his ‘Planet Human’ documentary

The Left has levelled a “furious attack” on Michael Moore after the filmmaker released a documentary on Youtube castigating “the green energy scam”, according to Sky News host Andrew Bolt.

Mr Moore released the documentary “Planet of the Humans,” free to charge this week to mark Earth Day.

The documentary casts doubt over the efficacy of renewables, in particular solar and wind energy.

The documentary filmmakers argue some green energy is hindering, rather than helping, the fight against dangerous climate change.

Mr Bolt said he did not agree with some of the documentary’s content, but the filmmakers “do make some great points.”

“This is why their film has come as a shock to so many,” Mr Bolt said.

“Green groups are actually trying to get ‘Planet of the Humans’ banned.

“Isn’t that a sign of the times? If you don’t like the message, just try and ban it.”

Australia And New Zealand Differ On COVID-19. The Economic Fallout Could, Too.

Aussie Resources Minister on the Green Covid-19 Recovery: “Coal can power the restart”