Related: AOC on Green New Deal: It ‘Costs $0 If Passed’

Authoritarianism In The Age Of Pseudoscience 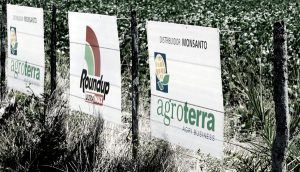 Following the court decision in the US to award in favour of Dewayne Johnson (exposure to Monsanto’s Roundup weed killer and its active ingredient, glyphosate, caused Johnson to develop non-Hodgkin lymphoma), attorney Robert Kennedy Jr said at the post-trial press conference:

The corruption of science, the falsification of science, and we saw all those things happen here. This is a company (Monsanto) that used all of the plays in the playbook developed over 60 years by the tobacco industry to escape the consequences of killing one of every five of its customers… Monsanto… has used those strategies…”

Johnson’s lawyers argued over the course of the month-long trial in 2018 that Monsanto had “fought science” for years and targeted academics who spoke up about possible health risks of the herbicide product.

Long before the Johnson case, critics of Monsanto were already aware of the practices the company had engaged in for decades to undermine science. At the same time, Monsanto and its lobbyists had called anyone who questioned the company’s ‘science’ as engaging in pseudoscience and labelled them ‘anti-science’.

We need look no further than the current coronavirus issue to understand how vested interests are set to profit by spinning the crisis a certain way and how questionable science is again being used to pursue policies that are essentially ‘unscientific’ – governments, the police and the corporate media have become the arbiters of ‘truth’.

We also see anyone challenging the policies and the ‘science’ being censored on social media or not being given a platform on TV and accused of engaging in ‘misinformation’. It’s the same old playbook.

The case-fatality ratio for COVID-19 is so low as to make the lockdown response wholly disproportionate. Yet we are asked to blindly accept government narratives and the policies based on them.

Making an entire country go home and stay home has immense, incalculable costs in terms of well-being and livelihoods. This itself has created a pervasive sense of panic and crisis and is largely a result of the measures taken against the ‘pandemic’ and not of the virus itself.

Certain epidemiologists have said there is very little sturdy evidence to base lockdown policies on, but this has not prevented politicians from acting as if everything they say or do is based on solid science.

The lockdown would not be merited if we were to genuinely adopt a knowledge-based approach. If we look at early projections by Neil Ferguson of Imperial College in the UK, he had grossly overstated the number of possible deaths resulting from the coronavirus and has now backtracked substantially.

Ferguson has a chequered track record, which led UK newspaper The Telegraph to run a piece entitled ‘How accurate was the science that led to lockdown?’ The article outlines Ferguson’s previous flawed predictions about infectious diseases and a number of experts raise serious questions about the modelling that led to lockdown in the UK.

Ferguson’s previous modelling for the spread of epidemics was so off the mark that it may beggar believe that anyone could have faith in anything he says, yet he remains part of the UK government’s scientific advisory group. Officials are now talking of ‘easing’ lockdowns, but Ferguson warns that lockdown in the UK will only be lifted once a vaccine for COVID-19 has been found.

It raises the question: when will Ferguson be held to account for his current and previously flawed work and his exaggerated predictions? Because, on the basis of his modelling, the UK has been in lockdown for many weeks, the results of which are taking a toll on the livelihoods and well-being of the population which are and will continue to far outweigh the effects of COVID-19.

Ferguson – whose model was the basis for policies elsewhere in addition to the UK – is as much to blame as anyone for the current situation. And it is a situation that has been fuelled by a government and media promoted fear narrative that has had members of the public so afraid of the virus that many have been demanding further restrictions of their liberty by the state in order to ‘save’ them.

Even with the promise of easing the lockdown, people seem to be fearful of venturing out in the near future thanks to the fear campaign they have been subjected to.

Instead of encouraging more diverse, informed and objective opinions in the mainstream, we too often see money and power forcing the issue, not least in the form of Bill Gates who tells the world ‘normality’ may not return for another 18 months – until he and his close associates in the pharmaceuticals industry find a vaccine and we are all vaccinated.

In the UK, the population is constantly subjected via their TV screens to clap for NHS workers, support the NHS and to stay home and save lives on the basis of questionable data and policies. Emotive stuff taking place under a ruling Conservative Party that has cut thousands of hospital beds, frozen staff pay, placed workers on zero-hour contracts and demonised junior doctors.

It is also using the current crisis to accelerate the privatisation of state health care.

In recent weeks, ministers have used special powers to bypass normal tendering and award a string of contracts to private companies and management consultants without open competition.

But if cheap propaganda stunts do not secure the compliance, open threats will suffice. For instance, in the US, city mayors and local politicians have threatened to ‘hunt down’, monitor social media and jail those who break lockdown rules.

Prominent conservative commentator Tucker Carlson asks who gave these people the authority to tear up the US constitution; what gives them the right to threaten voters while they themselves or their families have been exposed as having little regard for lockdown norms. As overhead drones bark out orders to residents, Carlson wonders how the US – almost overnight – transformed into a totalitarian state.

With a compliant media failing to hold tyrannical officials to account, Carlson’s concerns mirror those of Lionel Shriver in the UK, writing in The Spectator, who declares that the supine capitulation of Britain to a de facto police state has been one of the most depressing spectacles he has ever witnessed.

Under the pretext of tracking and tracing the spread of the virus, the UK government is rolling out an app which will let the likes of Apple and Google monitor a person’s every location visited and every physical contact. There seems to be little oversight in terms of privacy.

The contact-tracing app has opted for a centralised model of data collection: all the contact-tracing data is not to be deleted but anonymized and kept under one roof in one central government database for ‘research purposes’.

We may think back to Cambridge Analytica’s harvesting of Facebook data to appreciate the potential for data misuse. But privacy is the least concern for governments and the global tech giants in an age where ‘data’ has become monetized as a saleable commodity, with the UK data market the second biggest in the world and valued at over a billion pounds in 2018.

Paranoia is usually the ever-present bedfellow of fear and many people have been very keen to inform the authorities that their neighbours may have been breaking social distancing rules.

Moreover, although any such opinion poll cannot be taken at face value and could be regarded as part of the mainstream fear narrative itself, a recent survey suggests that only 20% of Britons are in favour of reopening restaurants, schools, pubs and stadiums.

Is this to be the new ‘normal’, whereby fear, mistrust, division and suspicion are internalized throughout society? In an age of fear and paranoia, are we all to be ‘contact traced’ and regarded by others as a ‘risk’ until we prove ourselves by wearing face masks and by voluntarily subjecting ourselves to virus tests at the entrances to stores or in airports?

Read the full article at off-guardian.org

Tucker: America is splitting into two before our eyes

Some states are using science to guide their decisions and cautiously beginning to relax their lockdowns. But power-drunk politicians in the other half of the country are tightening their lockdowns even now. #FoxNews #Tucker 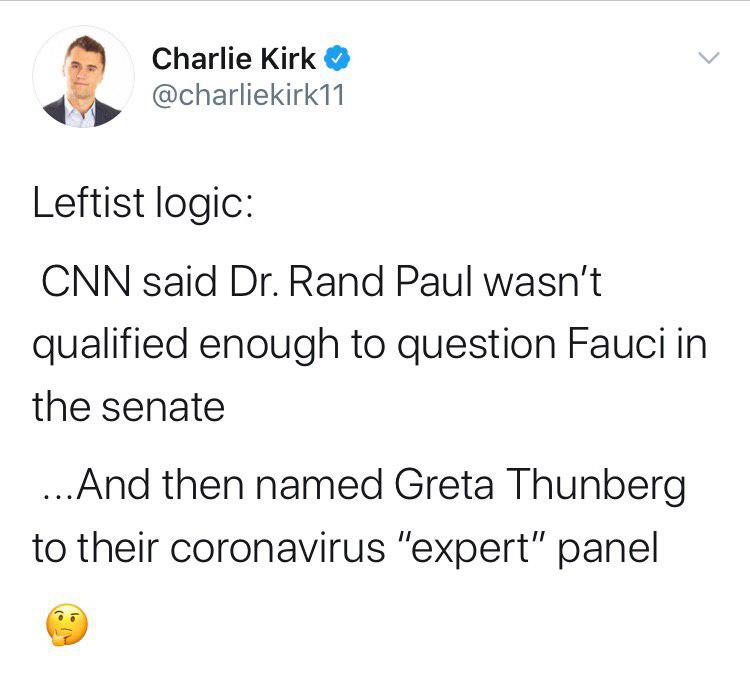 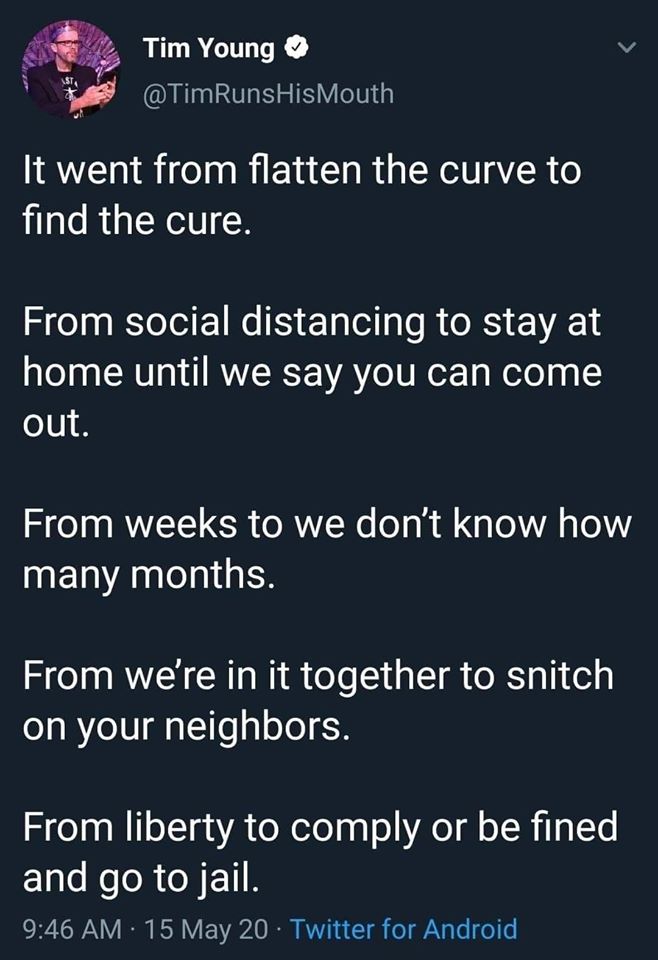