Recently, sanity prevailed in California as the judge rebuked the idea that there was a conspiracy to defraud the public by oil companies. Here’s a look at the argument presented.

We are still waiting for the transcript of the “climate tutorial” requested by the judge, but here are my preliminary reactions to what happened on Wednesday:

The Powerpoint used by the lawyers for Chevron (the other oil companies didn’t send someone to speak, but all of the defendants submitted the Powerpoint into testimony) is now posted here:

The Daily Caller’s Michael Bastasch observes the irony of an oil company citing the IPCC reports while environmentalists say those reports are inaccurate:

Here is my take on what is good about Chevron’s presentation:

Here is what is wrong with the Chevron presentation:

In short, Chevron may have made only so many arguments as it thinks is necessary to win this case, which I suppose is what good lawyers do. It made those arguments well, and perhaps they will convince a liberal judge to end a frivolous case. But Chevron left many false and misleading claims before the court, claims that contaminate the public debate on climate change and will continue to haunt the fossil fuel industry and threaten our energy freedom unless they are faced and debunked.

U.S. cities suing energy companies over climate change may have mischaracterized their own evidence, casting more doubt on the validity of the litigation and putting an additional spotlight on the environmental activists who are steering the broader campaign.

At least three of the recent lawsuits mention the Global Climate Coalition (GCC), a now-defunct organization whose membership included several of the defendants. The filings mention an “internal” presentation from 1996, in which the GCC allegedly claimed there were “potentially irreversible” impacts from climate change, which could include “significant loss of life.”

The lawsuits cite this as evidence that the GCC and its members had “admitted internally” that their public statements about the uncertainty of climate change were “invalid.” The same characterization appears verbatim in the lawsuits filed by New York City, Oakland, and San Francisco.

But the document cited shows that GCC was not admitting those impacts. It was merely summarizing what the U.N. Intergovernmental Panel on Climate Change had found in its latest assessment, along with many “uncertainties” as described by the IPCC.

In fact, a slide that introduces the items cited in the lawsuits makes clear that GCC was neither endorsing nor disputing the findings. The headline reads: IPCC SECOND ASSESSMENT REPORT – KEY NEW FINDINGS/PREDICTIONS

Another slide describes the “major uncertainties with IPCC predictions of the future.” Each of the claims listed by the plaintiffs appears on slides with headlines in which the word “predicted” is underlined.

The revelation comes in the wake of news that the cities made divergent claims about climate change in their lawsuits and their disclosures to potential investors. The municipalities are suing companies over specific risks and future damages from climate change, including sea level rise, wildfires, and other natural disasters.

But the plaintiffs downplayed those same risks and damages in their bond offerings to investors. In a petition filed in January, ExxonMobil observed:

“Notwithstanding their claims of imminent, allegedly near-certain harm, none of the municipalities disclosed to investors such risks in their respective bond offerings, which collectively netted over $8 billion for these local governments over the last 27 years. To the contrary, some of the disclosures affirmatively denied any ability to measure those risks; the others virtually ignored them. At least two municipal governments reassured investors that they were ‘unable to predict whether sea-level rise or other impacts of climate change or flooding from a major storm will occur, when they may occur, and if any such events occur, whether they will have a material adverse effect…’” (emphasis added)

The differing statements raised questions about whether the cities may have committed securities fraud, or if the lawsuits themselves were filed in bad faith.

The mischaracterization of GCC could reignite that discussion, or even present new challenges for the plaintiffs – including questions about what else may be mischaracterized in their filings.

In one of the original climate lawsuits, filed in 2008 on behalf of the Alaskan village of Kivalina, the plaintiffs made the same claims as New York City, Oakland, and San Francisco – including the specific citation of “potentially irreversible” impacts and a “significant loss of life” as a result of climate change.

Both were similarly attributed to GCC without mentioning that the group was summarizing the IPCC.

The attorney who spearheaded the Kivalina case – which a federal appeals court dismissed in 2012 – was none other than Matt Pawa, the same attorney who is now representing New York City, Oakland, and San Francisco. Mr. Pawa represented the village in his capacity with Pawa Law Group, but he was hired last year by Hagens Berman Sobol Shapiro LLP. 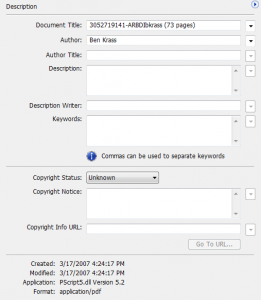 The source document in the cities’ complaints also has a connection to Mr. Pawa. The Energy and Policy Institute links to the original GCC minutes and presentation, but the document properties show it was created in 2007 by Ben Krass – another attorney from Hagens Berman who is involved in the recent climate lawsuits.

Prior to Hagens Berman, Mr. Krass was a partner at Pawa Law Group.

Mr. Pawa, Mr. Krass, and Hagens Berman all stand to reap a monetary windfall if the lawsuits succeed, although legal experts agree their success is unlikely. According to information obtained via an open records request, Oakland and San Francisco would each pay 23.5 percent of the recovered damages to the Hagens Berman team, and according to Bloomberg News, “New York is working on a contingent-fee deal like San Francisco’s” agreement.