The State Department BRIBED FBI officials with highly desired “overseas job posts” and other favors in exchange for altering some email classifications in order to protect Hillary.

A senior State Department official repeatedly pressed the FBI to change the classification of emails stored on Hillary Clinton’s private server, according to FBI interview summaries set to be released in the coming days.

Patrick Kennedy, the undersecretary of state for management, discussed providing additional overseas slots for the FBI in exchange for revisions to classifications of the sensitive emails.

The 34 summaries, known as FBI “302s,” will be released in connection with a Freedom of Information Act request and after pressure from the House Committee on Oversight and Government Reform. Two additional 302s are being withheld because they contain information classified at the Top Secret/SAP level.

According to the summary, Kennedy wanted help. The FBI official spoke with Kennedy and Kennedy raised the possibility of keeping at least one Clinton email from public disclosure by obtaining a “B9” exemption under the Freedom of Information Act, a rarely used exemption that refers to “geological and geophysical information and data.”

One email in particular concerned Kennedy and, according to the FBI summary, providing a B9 exemption “would allow him to archive the document in the basement of the department of state never to be seen again.” The FBI official told Kennedy that he would look into the email if Kennedy would authorize a pending request for additional FBI personnel in Iraq.

Our government has completely lost its place.

It is corrupt to the core, and our system is rigged to keep the rich and powerful in place.

The ONLY way to change this, is to kick these globalists out of office and elect Donald Trump – the #AmericaFirst candidate.

We must end this global nightmare and cesspool pf corruption and cronyism. 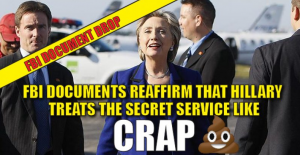