Stupidity or corruption on steroids??

Actor and environmental activist Arnold Schwarzenegger called President Donald Trump crazy for withdrawing the United States from the Paris Agreement and said the world’s most powerful country is “still in” the accord to reduce greenhouse-gas emissions.

Speaking on Monday before delegates at the United Nations Climate Change Conference in Katowice, Poland, Arnold Schwarzenegger said that “America is more than just Washington or one leader,” according to the Associated Press. The former Republican governor of California called the president “meshugge,” which means “crazy” or “senseless” in Yiddish, for walking away from the 2015 international agreement against the wishes of copious high-ranking elected-officials, policymakers, and business leaders in the U.S.

The veteran actor’s remarks came after President Trump refused to sign a joint statement on climate change at the Group of 20 Summit in Buenos Aires, Argentina, over the weekend.

In June, the president announced his decision to leave the accord, arguing it harmed future economic prospects of the U.S. and placed the country “at a permanent disadvantage.”

Schwarzenegger is a frequent critic of the administration, having referred to President Trump in 2017 as a “total disaster.” In an eyebrow-raising interview with Men’s Journal, the Terminator star said he wished he could “smash” the president’s face into a table.

“I said, ‘Let’s sit on it for an hour,” Schwarzenegger told the outlet. “I called my assistant and said, ‘I think what we really should do is request a meeting a go back to New York. And then we just smash his face into the table.’”

“And then I think, ‘We can’t do that, either. I think I have to be above all of that and put him on the spot,’” added the actor.

.. and talking about stupidity:

Former President Barack Obama takes credit for the domestic oil boom that came in the wake of his presidency. Stephen Green fact-checks his keister. Bill Whittle and Scott Ott drill down until they strike hubris. It doesn’t take long.

.. and even more stupidity from the low IQ left:

What Else Does Burnside Believe That’s Clearly Bull?

Confirmation bias: when you are so desperate to believe Donald Trump is a moron that you will believe any crazy thing, no matter how obviously fake. And to think Julian Burnside QC is actually a lawyer! 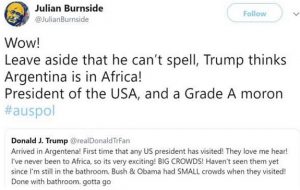 How many signals are there in that one tweet that shout – SHOUT – that it’s fake?

That makes ten screaming warnings that this is a fake, yet this QC didn’t pick up on a single one.

Yet he’s the one still flinging around the word “moron”: 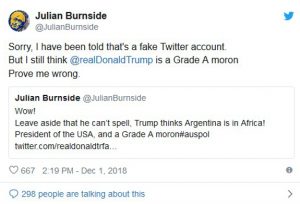 Personally, I’d be very, very wary entrusting a complex legal case to a man with this blindness to detail – if this is at all typical of his work.