Burma’s leader Aung San Suu Kyi has lashed out at “misinformation” from “terrorists” amid reports that the Burmese army has laced the country’s border with Bangladesh with landmines to target Rohingya refugees fleeing a violent military crackdown in the northwest Rakhine state.

Nearly 126,000 civilians from the Rohingya Muslim minority have now taken refuge in the squalor of overburdened relief camps in Bangladesh to escape a two-week “clearance operation” by the Burma security forces that has razed villages to the ground and left hundreds dead.

UN Secretary General, Antonio Guterres, on Tuesday warned of the risk of ethnic cleansing and regional destabilisation, expressing fears that the violence could spiral into a “humanitarian catastrophe.”

But despite facing a barrage of international criticism, particularly from outraged Muslim countries, former Nobel peace prize winner Aung San Suu Kyi has made no mention of the desperate plight of Rohingya civilians.

Instead she has blamed “terrorists” for “a huge iceberg of misinformation calculated to create a lot of problems between different countries.”

Her comments were made in a telephone conversation on Tuesday with Turkish President Tayyip Erdogan, who has accused Burma, also known as Myanmar, of “genocide” against the Rohingya.

In a readout of their conversation, posted by her office on Facebook, Ms Suu Kyi referred to images of killings posted on Twitter by Turkey’s deputy prime minister that were later deleted as they were not from Burma. 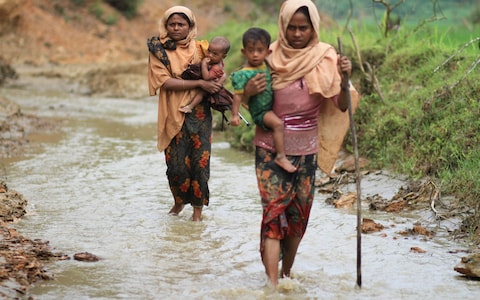 She said the government had “already started defending all the people in Rakhine in the best way possible.”

Fake information has been fuelled by the government’s denial of access to Rakhine state for independent observers.

Human rights and aid workers depend for information on eyewitness accounts from the exhausted refugees streaming across the border, and on phone evidence gathered by an extensive network of Rakhine activists on the ground.

The absence of international monitors has allowed the army to easily deny atrocities.

On Wednesday a Burmese military source denied angry accusations from the Bangladesh government that soldiers had been laying landmines along the border over the past three days.

Meanwhile, the Burmese authorities bolstered their “terrorist” narrative by warning the public that insurgents from the Arakan Rakhine Salvation Army (ARSA) were planning to bomb civilians in major cities. 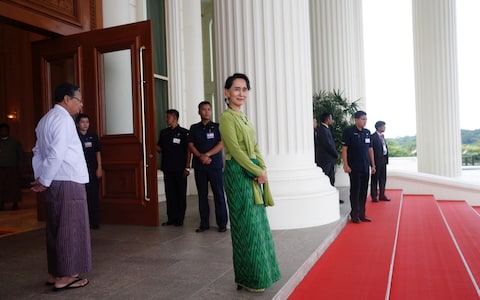 ARSA, who sparked the latest brutal crackdown by attacking paramilitary checkposts on August 25, have also been accused of killing dozens of ethnic Hindus in northern Rakhine state.

Tun Khin, President of the Burmese Rohingya Organisation UK, said ARSA had drawn “desperate youth” into its ranks but did not represent the general Rohingya population.

“The Rohingya reject violence and we are seeking a political solution,” he said.