The Aussie government has slashed $500 million from the domestic ARENA renewable energy budget, instead of $1.3 billion – but the government has also just given away $300 million to “climate affected” Pacific Islanders.

The Australian Renewable Energy Agency has escaped closure with the government agreeing to restore $800 million of funding.

The agency, which provides financial grants for 40 per cent of the CSIRO’s energy research, was set to be stripped of $1.3 billion as part of the government’s Omnibus Savings Bill.

The Coalition also planned to merge its funding role with the Clean Energy Finance Corporation, which expects to see a financial return on money it invests in research.

But a compromise was reached on Monday night to limit the cuts to $500 million after criticism from the opposition, academics and workplace unions.

Australia will chip in an extra $80 million in disaster relief for Pacific island nations vulnerable to climate change.

Prime Minister Malcolm Turnbull announced a $300 million package over four years at the Pacific Island Forum at Pohnpei in Micronesia on Friday.

Mr Turnbull said the cash will be used on engineering projects to protect against flooding from cyclones, early warning systems and rain water catchment tanks.

‘Adaptation and resilience is very much a local issue,’ Mr Turnbull said.

I guess the price of making an economically worthless living off the fantasies of politicians, is your budget can be stripped and reallocated, any time the boss wants to do some international virtue signalling. 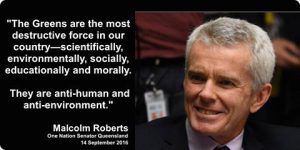