Image: About Those ‘Green Energy’ Unicorns…

I visited an auto shop the other day. As I walked around all the new “cars” I noticed, they were all electric or hybrids. I walked over to the nearest salesperson of some sort and asked: “Have you completely given up on selling cars?”

I do not get why we still take part in this scam, we all know electric cars and “green” energy is just a scheme for the globalist to secure income and control. No one still thinks it got to do with the environment, at least not people with a 3 digit IQ!

We should just reject it out of hand!

By Stop These Things & The Australian

Having lost the un-loseable Australian election in May last year, an angry rump of Labor backbenchers is keen to ditch the party’s suicidal renewable energy policies, with a view to recovering the ground they lost trying to win the sandalista vote in the inner city goat’s cheese circle.

Australia’s economic future depends, in no small part, on getting the ALP to decouple itself from the lunatic fringes of the hard-green left, and to start thinking about reliable and affordable power, of the kind that fuels industry growth and jobs.

Whatever policies are directed at recovering from the coronavirus lockdown, without reliable and affordable power Australia’s energy hungry businesses are doomed. With rocketing power prices, and an intermittent supply, mineral processors and manufacturers are terminal, and have been for years.

Politicians and academic boffins have been giving lip service to improving Australia’s “resilience” and “self-sufficiency”, resulting in the renaissance of Australian manufacturing and industry.

International supply chains may have ground to a halt and the orderly flow of goods to market disrupted, but, before too long China will regain its primacy as the world’s manufacturing powerhouse. Two factors are responsible for China’s dominance in that domain: a cheap and flexible labour supply; and a reliable and affordable power supply. The latter being generated by hundreds of coal-fired power plants, with more being added every day.

Labor MP, Joel Fitzgibbon is one of those who understands the importance of the relationship outlined above.

Joel occupies the Federal seat of Hunter – a region of NSW dominated by coal mines and coal-fired power plants. Although, he very nearly didn’t; he suffered a near death experience when workers in the mining and power industries turned on him with a vengeance. During the May 2019 election, there was a 9.5% swing away from Joel to the Nationals, a fair slice of which came by way of preferences from a One Nation candidate, Stuart Bonds who picked up 21.6% of the vote. Bonds campaigned on a platform supporting coal-mining and reliable and affordable, coal-fired power – policies a million miles away from those being peddled by the modern, so-called ‘Worker’s Party’.

At a point when the ALP is looking increasingly unelectable – thanks to its waffly leader, Anthony Albanese and an obsession with delivering interminable subsidies to chaotically intermittent wind and solar – Joel Fitzgibbon has started talking sense, much to the annoyance of the lunatic fringe within the party. 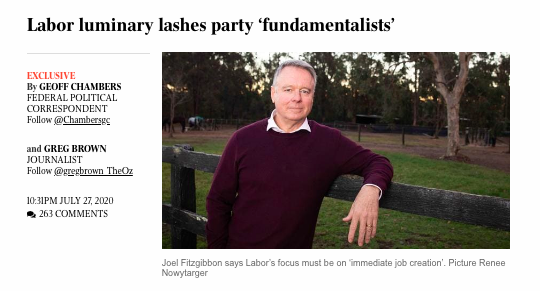 Joel Fitzgibbon has accused Labor’s influential internal environment lobby of putting blue-collar jobs and lower energy prices at risk – and warned them against exaggerating the number of jobs in the renewable energy sector – as the party’s split over climate and energy policy grows.

The opposition resources and agriculture spokesman said the Labor Environment Action Network’s “fundamentalist” policies were out of step with ALP values and making the party unelectable, according to leaked emails obtained by The Australian. LEAN, which invited Mr Fitzgibbon to a Wednesday forum, was founded by Labor’s home affairs spokeswoman Kristina Keneally and opposition cabinet secretary Jenny McAllister to push the party into stronger climate change action.

Mr Fitzgibbon told LEAN that Labor’s focus must be on “immediate job creation”.

“LEAN also needs to be cautious about overstating the number of job opportunities provided by capital-intensive and import-dependent renewable projects in the short to medium run,” he wrote in the Saturday email.

Mr Fitzgibbon said, given the impact of COVID-19, Labor should be focused on “building on the strengths of those industries which have performed well during the crisis. They provide the best opportunity to deliver outcomes quickly. Immediate job creation cannot be achieved with a fixation on concepts like “green steel” which are decades away,” he wrote.

Mr Fitzgibbon told LEAN he would not participate in the group’s “Jobs & Steel: the Hunter’s Renewable Future” forum on Wednesday because it had “already made its position” clear on key environmental policy issues.

In the email, Mr Fitzgibbon criticised LEAN over its pre-emptive positions on environmental policies, including the Narrabri gas project and EPBC review.

“I note LEAN has accused others of pre-empting the final EPBC review report, but is guilty of doing exactly that itself,” he said.

“I also note LEAN has passed judgment on the Narrabri gas project before the IPC has completed processes and scientific analysis. This pre-emptive attack on a project which will deliver many blue-collar jobs and lower energy prices for households and industry is contrary to ideals on which Labor was formed.”

Mr Fitzgibbon is backed by Australian Workers’ Union national secretary Dan Walton, who said policy positions advocated by LEAN would be “devastating for the livelihoods of blue collar workers”.

“I think most senior Labor figures consider their advocacy as something to be treated with a fair degree of caution,” Mr Walton, who represents workers across the steel, mining, manufacturing and agriculture sectors, said.

The Hidden Costs Of Net Zero