Media lawyer Justin Quill said Mr Bandt could be vulnerable in a defamation case. “Mr Bandt has a reasonable opinion defence to the coward comment, although it’s certainly not absolute,” said Mr Quill, who advises The Australian.

“In relation to the war criminal comment, he may have to try and prove Mr Molan is a war criminal in order to defend the matter.

“If I was advising Mr Bandt, I would say he is in a bit of trouble… 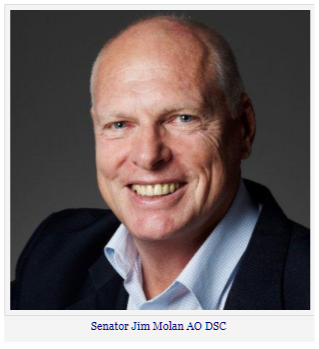 Actually, he’s in more trouble than Quill – or Bandt – may realise.

Check the Greens’ incredible source for that war-criminal smear:

Yet Molan had one more disgusting insult to endure.

Greens leader Richard di Natale on Tuesday suggested he was also a war criminal, having been chief of operation of all allied forces in Iraq when Fallujah was recaptured from Sunni insurgents backed by al-Qaeda.

“At the time of the assault on Fallujah, under the command of now Senator Molan, a UN special rapporteur said that coalition forces used hunger and deprivation of water as a weapon against a civilian population, a flagrant violation of international law,” claimed Di Natale.

How low can the Greens go? And what hypocrites. Di Natale’s source is even worse than Britain First. That “UN special rapporteur” is Swiss academic Jean Ziegler, a radical who once claimed genocidal Zimbabwean dictator Robert Mugabe had “history and morality with him”.

Ziegler not only helped launch the “Moammar Gaddafi Prize on Human Rights” in honour of the Libyan dictator, but won it along with Castro, French Holocaust denier Roger Garaudy and the “Stone Throwing Children of Occupied Palestine”.

He also proclaimed “total support for the Cuban revolution” and defended the Hezbollah terrorist organisation as a “national resistance movement”, while calling the US an “imperialist dictatorship”.

Small wonder his accusations of coalition war crimes were denied by the US.

Can’t wait to see Bandt cite this source in court.