And what did Clinton have to fear from “The Bulldog”? 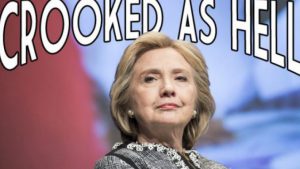 Hillary Clinton didn’t make it to the Democrat presidential nomination without knowing how to attack her adversaries before they could hurt her too badly.

So when Republican congressional investigators were hunting down the truth about the Benghazi terrorist attacks that killed four Americans in 2012, the staff loyal to the woman whose unfettered ambition might carry them all the way to the White House had to strike.

And for Hillary’s minions, no target was more tempting — or more timely — than Trey Gowdy, chairman of the House Select Committee on Benghazi.

According to an email uncovered by the Daily Caller that was part of a trove of hacked documents published by the WikiLeaks site, Clinton’s aides had been instructed to find some way to discredit the South Carolina congressman in public – especially before he used a Sunday morning news show last year to launch a blistering series of attacks that turned out to be right on the money.

In an email apparently written at Clinton’s behest, communications director Jennifer Palmieri sought ideas from Clinton’s inner circle on how best to try to undermine Gowdy before he appeared on “Face the Nation” in June, 2015, to discuss the House Select Committee on Benghazi’s investigation of the former secretary of state.

Dated June 27, 2015, the list of Palmieri’s recipients reads like a who’s who of the Clinton email scandal, including campaign chairman John Podesta, Clinton chief of staff Cheryl Mills, and spokesman Brian Fallon.

The main topic seems to be Gowdy’s interrogation of Sidney Blumenthal, Clinton’s shady foreign policy adviser whose work behind the scenes was partially revealed at the time by Gowdy’s release of about 60 emails related to Benghazi.

It was enough to get Hillary’s attention, and cast about for ways to make Gowdy look bad before he faced the nation on TV.

HRC asked me what offense we could do today to set up Gowdy for Face The Nation tomorrow.

Nick and I thought best option would be a statement from Podesta doing some offense on how this latest obsession on Sid emails is absurd, further evidence this is partisan effort.

HRC was hoping for a video. Don’t think that is possible for tomorrow. I could see doing one for Tuesday, when we have more email news to face that could put all this in context.

In the meantime, Nick is drafting a statement that we will share with all of you. So be on the lookout for that.

And what did Clinton have to fear from Gowdy’s appearance on the program? Plenty, as it turned out.

The congressman known as “the bulldog” for his dogged, tenacious sinking of teeth into an investigation and not letting go, summarized the committee’s findings at the time that were devastating to Clinton’s case. Those findings were oddly echoed a year later after FBI Director James Comey announced that he was not recommending criminal charges against Clinton for her flagrantly careless handling of American national security in her email communications.

Speaking to “Face the Nation’s” John Dickerson, Gowdy summarized the Clinton case at the time like the prosecutor he used to be:

She said that the public record was complete. You will remember in her single press conference she said that she had turned over everything related to work to the Department of State. We know that that is false.

In hindsight, Gowdy’s comments were dead on, and the case against Clinton only got stronger from there — that was before the country learned about deleted emails, smashed smart phones, destroyed computers, and immunity deals that shocked seasoned FBI agents.

And it was a year before the country learned that FBI Director James Comey was going to decide nothing Hillary did — despite many months of investigation that turned up strong evidence of intent to violate the law — warranted prosecution.

Hillary has managed to beat the rap on her emails so far, and it’s partly because she knows how to beat up anyone who gets in her way.

That crazy, criminal, sick old woman is spinning out of control. It’s so far out there it’s unbelievable there are no authority to stop it ..