By now most people realize that Hillary Clinton is the brains behind the recount scam.

If Stein were concerned with “election integrity” she would focus on more than just the states that would help Hillary win the election.

We’re now learning that one of the so-called “computer scientists” who detected “fraud patterns” has strong ties to George Soros, thus linking Soros to the recount.

This is more than just a money-grabbing scam for Stein or a “delegitimizing” campaign against Trump.

As reported earlier, corrupt Hillary Clinton is not accepting her defeat in the recent Presidential election. Instead, in ways only the corrupt Clinton’s could conjure up, she put in place a process to steal the election.

It was clear when Jill Stein asked for recounts in three states won by President-elect Donald Trump in this year’s election (Wisconsin, Michigan and Pennsylvania) that Stein was not acting alone.

The Clinton’s had somehow enticed her to do so.  For one, why did Stein select only these three states to do recounts  – states that if overturned would give Hillary the election?  Rampant voter fraud is also suspected in (Chicago) Illinois, California (illegals) and New York (NYC), so why did Stein only select those three Midwestern states for recounts if she was interested in the integrity of the voting system?

Secondly, where was the money coming from that went into Stein’s fundraising account?  We reported that payments from a ‘bot’ in the amount of $160,000 on the hour every hour during the first days of her ‘fundraising’ drive were being made.  Where did this money come from?

Thirdly, we reported that George Soros was behind the recount.  The corrupt plan to steal the election from President Trump began when a group of “scientists” claimed that the election results were hacked and suggested recounts in Michigan, Wisconsin and Pennsylvania.  Even shamed pollster Nate Silver stated these allegations were wrong and that Michigan did mostly paper voting so computer tampering would not appear there.  Then it was uncovered that a member from the group of ‘scientists’ happens to be voting-rights attorney John Bonifaz who launched the National Voting Rights Institute In 1994 with Soros.  Bonifaz was the Institute’s President.

(Billionaire Soros, admited to helping the Nazis steal from Jews in WWII, was noted repeatedly in Wikileaks’ emails as the puppet master behind the corrupt Democrat Party, and is reportedly wanted by Russia dead or alive for being a threat to Russian security.)

The bigger question with the recounts is – how do the Clintons make the steal?  All the votes have to be certified by December 13 according to a report on Friday.  Some suspect that the recounts will be stalled to prevent these states votes being considered in the national election.  But under this scenario Clinton would still be losing to Trump in the electoral college by 260 (306 minus 46) to 232.

Another scenario is that these states will move to the Hillary column after the recounts are complete, which would give her the win.  But after the first day of recounts in Wisconsin, Hillary picked up only 1 vote.  The probability that Clinton could pick up more than 1,000 votes in any one state is very low, making it statistically impossible for Clinton to win enough votes in any one of these states, let alone all three, to steal the election. 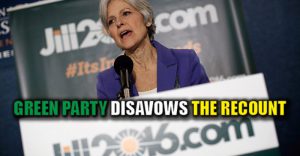 The Green Party wants NOTHING to do with the Jill Stein and Hillary Clinton recount.

As a matter of fact, they’re downright disgusted by the whole thing and issued a statement, not only distancing themselves from it, but calling out the hypocrisy of only focusing on states Hillary lost, and the confusing message this move has sent to Americans.

Of course, we all know it’s obvious what is happening here…..Jill Stein is working as Hillary’s flunky.

By this point, anyone who doesn’t recognize that is a dummy.

Here is the Green Party's full statement distancing themselves from @DrJillStein over the recount scandal: pic.twitter.com/Nmh6CdtkNx