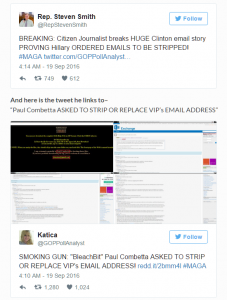 This exchange took place on Reddit and involves Paul Combetta, an employee with Platte River Networks, the company in charge of Hillary Clinton’s home server.

Combetta was granted immunity from Obama’s Department of Justice in their investigation of Clinton.

Combetta was the employee who deleted all of Hillary Clinton’s emails.

According users on Reddit, Combetta asked for assistance in July 2014 from Reddit users on how to purge emails and how to strip VIP’s email address from “a bunch of archived emails.”

On Jul. 14, 2014 u/stonetear posts to r/exchangeserver saying that a VIP customer requested they purge emails untraceable.

Hello all- I may be facing a very interesting situation where I need to strip out a VIP’s (VERY VIP) email address from a bunch of archived email that I have both in a live Exchange mailbox, as well as a PST file. Basically, they don’t want the VIP’s email address exposed to anyone, and want to be able to either strip out or replace the email address in the to/from fields in all of the emails we want to send out. I am not sure if something like this is possible with PowerShell, or exporting all of the emails to MSG and doing find/replaces with a batch processing program of some sort. Does anyone have experience with something like this, and/or suggestions on how this might be accomplished?

borismkv: There is no supported way to do what you’re asking. You can only delete emails after they’re stored in the database. You can’t change them. If there was a feature in Exchange that allowed this, it could result in major legal issues. There may be ways to hack a solution, but I am not aware of any. permalinkembedsavegive gold

As a PST file or exported MSG files, this could be done though, yes? The issue is that these emails involve the private email address of someone you’d recognize, and we’re trying to replace it with a placeholder address as to not expose it.

exproject: To my knowledge, there’s no way to edit existing messages, that’s a possibility for a discovery nightmare. To strip/rename on outbound/inbound you could rewrite it with a transport rule.

That wouldn’t work on existing messages though right?

odoprasm: Is there no way to access and edb manually?

I have full access to the server – what are you suggesting with the EDB file?

I think maybe I wasn’t clear enough in the original post. I have these emails available in a PST file. Can I rewrite them in the PST? I could also export to MSG and do some sort of batch find/replace. Anyone know of tools that might help with this?

exproject: Just because you have the messages available in multiple formats and locations doesn’t change that it’s an attribute of the envelope not meant to be rewritten. The functionality is just not built into any tool I know of. Having that functionality would create the ability to screw with discovery (I mean, there could be mitigation with versioning, but that would need other configuration) While it may not be a read-only part of the envelope(I’m not actually sure), the only tool that MIGHT be able to do what you want is MFCMapi, and I don’t think you want to play with that for this job. The chance of getting it wrong would be pretty high I think and it is not a particularly friendly tool. I’m not sure it could be scripted with it either. My recommendation would be what/u/borismkv said. Making a mailbox for VIP and telling them to use that. Forwarding to VIPs mailbox would be ripe for them to just respond directly instead of responding through his relay mailbox. As for your existing messages, if the current users absolutely cannot see the existing messages, you’ll need to do a search and export and just forcibly remove the messages from their mailboxes. It’s not clean and not advised by me, but if they don’t want VIPs address out there it will need to be removed. I would do a search with his email address as the query with -LogOnly -LogLevel Full and see what kind of results you get.

Can somebody make sure we have the twitter posts archived too? I really don’t trust twitter to keep those up.

UPDATE: Here’s a screengrab of the archived pictures from Reddit: