Two Russian supersonic bombers blasted through the European continent, sending four nations into a panic as they scrambled their fighter jets to engage.

The flight was intercepted by the UK, Norway France and Spain as the Tupelov TU-160 jets made a daring flight from Norway to Spain and back. During the flight, they swooped across the north of Scotland before skirting by the west coast of Ireland and ending up near northern Spain.

Media in Spain are reporting it is the furthest south a Russian tactic of this kind has been attempted.

The flight occurred two weeks ago, but it is only coming to light following a statement from the French Defense minister,The Sun is reporting.
According to the statement, the two bombers were first detected by Norway, which scrambled two F-16 jets to accompany them to the north of Scotland – where they were then intercepted by RAF Typhoon aircraft.

Norway, the UK, France and Spain all scrambled jets as the TU-160 https://t.co/6ssveXUFIM pic.twitter.com/XNbzF2xOAa

French Rafale fighter planes then picked up the bombers after they skirted Ireland’s west coast, before Spain sent two F-18 jets to intercept the Russian planes north of Bilbao.

The RAF has confirmed that the Russian jets did not enter UK airspace at any point. This is another in a set of scares involving the Russian Federation in recent months. 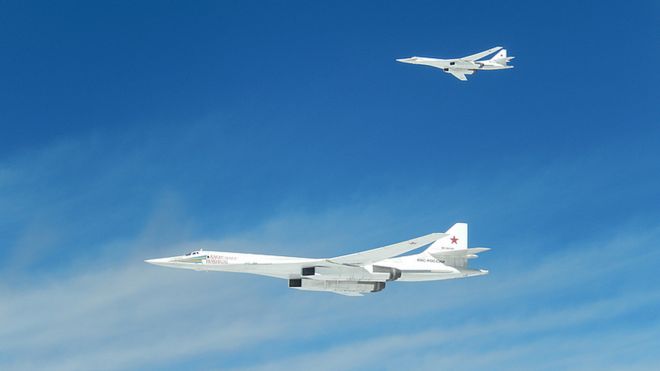 Two Russian Blackjack bombers were intercepted by fighter jets from four European countries as they flew from the direction of Norway to northern Spain and back, it has emerged.

Norway, the UK, France and Spain all scrambled jets as the TU-160 planes skirted the airspace of each country. It comes at a time of heightened tension between the West and Russia.

Correspondents say the frequency of Russian bombers being intercepted by Nato planes has increased markedly.

Spanish media say it is the furthest south such an operation has had to take place.