It wasn’t sexism, or racism. It was the left’s fault. It was Hillary Clinton’s fault.

In an awesome Facebook rant, Pie explains the real reason why Donald Trump win the election.

Pie explained the problem with the political left:

“Our argument isn’t won by hurling labels and insults. When we will learn the key is discussion?”

Pie said he’s afraid to even mention these views to his leftist friends.

“People like me, I’d get f*cking lynched if I said this.

“The left have decided that any other opinion – any other way of looking at the world is unacceptable. We don’t debate anymore because the left won the cultural war. So if you’re on the right, you’re a freak. You’re evil, you’re racist, you’re stupid. You’re a basket of deplorables. How do you think people are going to vote if you talk to them like that? When has anyone ever been persuaded by being insulted or labeled?

“So now, if you’re on the right or against the prevailing view, you are attacked for raising your opinion.”

The polls were wrong because the people aren’t allowed to say what they think, Pie said. “The left doesn’t allow them to. We have made people unable of articulating their position for fear of being shut down.”

Engage in the debate, Pie says. “Talk to people who think differently to you and persuade them of your argument. It’s so easy and the left have lost the art.

“Stop thinking that everyone who disagrees with you is evil, or racist, or sexist or stupid and talk to them. 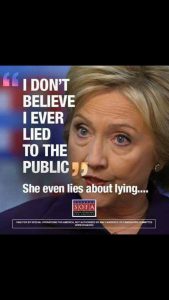 Today there is hope for the American people. #MakeAmericaGreatAgain pic.twitter.com/wQ4PEHw7qU