The incident could scupper a wider deal that encompasses the evacuation of thousands of trapped rebel fighters and civilians from the last opposition foothold in east Aleppo.

Hezbollah, the Lebanese militant group fighting alongside Syria’s government, says the buses were burned during fighting between the al-Qaida-affiliated Fatah al-Sham Front and a rebel group that supported the evacuations.

The Observatory says six vehicles were burned while Hezbollah’s media outlet put the number at five.

Several thousand civilians evacuated Aleppo on Thursday before the process was halted.

The U.N. Security Council is expected to vote on a resolution demanding immediate access for the United Nations to besieged parts of Aleppo and throughout Syria.

A draft resolution called on Secretary-General Ban Ki-moon to immediately redeploy U.N. staff already on the ground to carry out ‘neutral monitoring’.

It stresses that evacuations of civilians ‘must be voluntary and to destinations of their choice’. 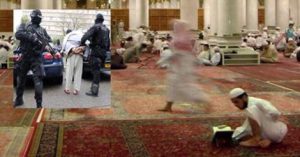 The horrific truck attack by a Muslim terrorist in Nice, France killed at least 84 people, including 12 children

But unlike Obama’s America after an attack, France started immediately raiding Islamic mosques to see what they could find. After all, far too many people in the Muslim community have not been helpful with bringing forth information to authorities.

And while those French investigators have been called racists, a Langy-sur-Marne based mosque was raided this week anyway… And they found a large collection of 7.62 Kalashnikov ammo along with boxes of Islamic State (ISIS) propaganda videos.

Authorities also raided one of the mosque’s leader’s homes, and found a revolver hidden near jihadist documents.

The recordings were found among a wealth of teaching material for young people in an undeclared madrassa, or religious school. Police removed a hard disk and 10 computers.
“No request was made to open a private school,” the state prefecture said in its statement.

Mohammed Ramdane, president of the local Muslim association in Lagny, had criticised the closure of the prayer hall at the time, saying: “Nothing has been found in the mosque. Nothing is hidden, we don’t hide anything.

France isn’t messing around. They’ve arrested more than 230 Muslims and collected more than 324 weapons. Many others are under travel bans and house arrest. They have shut down three mosques and have raided more than 2,300 homes.

Cazeneuve said the number of weapons apprehended so far is staggering.

He said: “In mere hours, we have seized one-third of the quantity of war-grade weapons that are normally seized in a year.”

And many French leaders have joined those voices in the EU calling for an end to importing Syrian Islamic refugees, as a proper screening process is impossible.

Compare that to the response we saw from President Barack Obama, who tried to blame the attacks on San Bernardino on “workplace violence” for days, while calling on his Attorney General to prosecute those who speak out against radical Islam. And then after the Orlando terror attack, Obama blamed guns, against excusing radical Islam — and refusing to even speak the words.

It looks like Trump’s comments were right, and it’s time to start treating Muslim communities with suspicion!