The Democrat Party is fraught with hypocrisy and as well all know, their presidential nominee, Hillary Clinton, is one of the worst offenders. As Democrats decry that Republicans, because of evil capitalism and free-market policies, don’t care about poor people, the Clinton campaign is caught scamming low-income donors.

As Clinton, who is a multimillionaire at least 100 times over, solicits donations from those who have far less than she does — thanks to the family slush fund known as the Clinton Foundation — her campaign has been caught overcharging her poorest donors.

The Observer reported that Wells Fargo Bank’s fraud department has been inundated with calls from Clinton donors that have been scammed out of their money with repeat charges that they did not authorize.

According to the Observer, numerous sources claimed that Clinton’s campaign has overcharged low-income donors who believed that they were making a one-time donation only to find multiple charges on their account.

A source from Wells Fargo’s fraud department, who chose to remain anonymous for fear of losing their job, told the Observer: “We get up to a hundred calls a day from Hillary’s low-income supporters complaining about multiple unauthorized charges.”

“The Hillary for America campaign will overcharge small donors by repeatedly charging small amounts such as $20 to the bankcards of donors who made a one-time donation. However, the Clinton campaign strategically doesn’t overcharge these donors $100 or more because the bank would then be obligated to investigate the fraud.

One elderly Clinton donor, who has been a victim of this fraud scheme, has filed a complaint with her state’s attorney general and a representative from the office told her that they had forwarded her case to the Federal Election Commission.”

Take a look at this photo of Carol Mahre’s US Bank statement with multiple charges on her account after Mahre made a one-time $25 donation, which she asserted she made because she’s “not rich,” according to KARE 11. 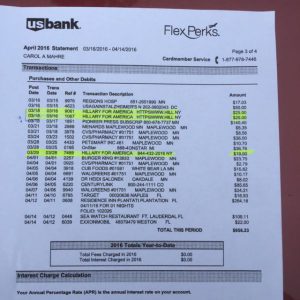 The fraud specialist source told the Observer: “They will call the Clinton campaign to get their refund and the issue never gets resolved. So they call us and we just issue the refund. The Clinton campaign knows these charges are small potatoes and that we’ll just refund the money back,” the source said and noted that while the numbers vary, they usually refund between $700 and $1200 a day because of the scam.

The New York Times reported that the Clinton campaign did the same thing back in 2007. According to the Observer, another bank source told them that the small donor scam is an effort by the campaign not only to get money but to pump up the small donor numbers reported to the FEC:

“The money that the bank has refunded would not be reflected in the FEC filings till after the election. This gives off the illusion to the public that her support and the amount she’s raised is much greater than what it is in reality.”

Hillary for America has allegedly been scamming donors since early spring this year. According to the source, the bank hasn’t heard of anything like this from GOP nominee Donald Trump’s campaign.