Having just finished one storm, another atmospheric river storm is possible for California next week. Details are uncertain this far out, but the system could bring heavy rainfall, higher snow levels, gusty winds, and renewed flooding concerns. 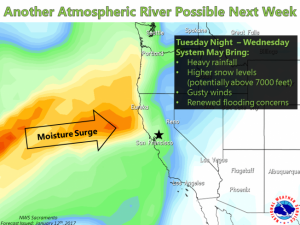 From the NWS forecast discussion:

Dry weather continues into Monday as high pressure aloft brings slightly warmer than normal temperatures. That will quickly come to an end however, as the next atmospheric river takes aim at the
West Coast. The plume of moisture will initially be aimed at the Pacific Northwest, but confidence is increasing that the firehose will shift southward, bringing another round of moderate to heavy precipitation to Northern California midweek. Given the already high river/creek stream levels, flooding will continue to be a problem if this pans out.

Strange High Winds and Out of Season Rains Globally

Category 5 hurricane winds in California, Cat 3 winds in Colorado, Cat 4 winds in Europe’s blizzards and the media uses a few tweets and a 10 second story to report, but a Cat 1 hurricane and its 24/7 news in summer so the media can hype global warming. All the while refusing to discuss cosmic ray intensity increasing which is the real cause of out of season floods happening globally.