Posts on May 2 saying China sent its last warning to North Korea over nuclear tests have gone viral. / Screen capture from Weibo

China has sent a final warning to North Korea over its military provocations, according to unconfirmed rumors spreading widely on Chinese social media Tuesday.

Chinese news outlets have previously said Beijing could turn its back on Pyongyang if the latter conducted a sixth nuclear test. But the rumor that China has given North Korea a final warning has drawn particular interest from Weibo users.

The rumor cited the May issue of Hong Kong monthly news outlet Dong Xiang. It said a Chinese Ministry of Foreign Affairs junior minister invited Park Myung-ho, an official of North Korea, for a meeting.

China’s Foreign Minister Wang Yi attended the meeting and asked his junior to read aloud the warning to the North over the nuclear test. The memorandum mentioned that China will condemn strongly, pull back on all economic cooperation and even blockade North Korea if it conducted the test.

A Chinese netizen said: “Maybe the bond between the nations is not that strong as we thought. North Korea is completely surrounded by enemies now.”

The Chinese government did not provide any explanation or correction to the rumor. 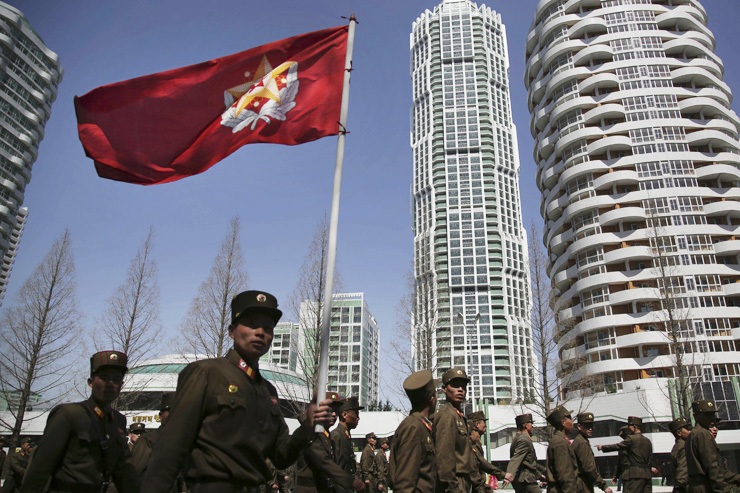 The Chinese Embassy in North Korea has advised Korean-Chinese residents to return home amid concern that the North’s military provocations may trigger a U.S. attack on the North, according to a source.

The embassy began sending the message on Apr. 20, five days before the North celebrated the 85th anniversary of the Korean People’s Army with a show of military power, Radio Free Asia said Tuesday.

The station cited a Korean-Chinese living in the North’s capital, who said he left for China late last month after the embassy contacted him.

He said he has been visiting China every two to three months but, after being told he should “stay in China for a while,” left North Korea a month early.

“The embassy has never given such a warning. I was worried and left the country in a hurry,” said the man, whose name was withheld.

But he said that most Korean-Chinese residents in Pyongyang were ignoring the message.

The city’s “peaceful” atmosphere, despite the global crisis due to the state’s threats involving missiles and nuclear tests, might have kept them unaware of the situation, he added.

The embassy’s warning indicates that China is worried that the saber-rattling North and U.S. moves to destabilize the Kim Jong-un regime might affect Chinese citizens abroad.

The North was expected to conduct its sixth nuclear test around the 105th anniversary of the state’s founder Kim Il-sung’s birth on Apr. 15 and/or on the national military anniversary on Apr. 25.

The test did not happen on either day, except a fizzled missile test on Apr. 29.