It’s like that “Where’s Waldo?” game, only some are worried that Huma might have had an “accident” and is no longer with us.

No one has seen or heard from her.

When asked if Huma would still be hosting a DC fundraiser this week, the Clinton campaign refused to comment.

Scandal-plagued close Hillary Clinton aide Huma Abedin is scheduled to headline a fundraiser for the Clinton campaign this week in Washington, D.C. However the Clinton campaign contact for the event refused to say whether or not Abedin would be in attendance. The fundraiser is being held at the home of a long-time Democratic Party donor and activist who was reportedly fined $5,000 for handing out cigarettes to the homeless to get them to vote for Al Gore in 2000.

Two phone calls by The Gateway Pundit to Amanda McTyre, who is listed as the Clinton campaign contact for the fundraiser, were disconnected without response when the question of Abedin still hosting the event was posed. A third attempt to call McTyre went straight to voicemail.

Abedin has disappeared from Clinton’s side on the campaign trail since news broke several days ago that the FBI was investigating computers belonging to Abedin and her estranged husband Anthony Weiner for emails and documents related to Clinton’s State Department email scandal. The newly discovered emails were found while the FBI was investigating Weiner for allegedly sexting a 15-year-old girl. Abedin worked by Sec. Clinton’s side at State and had her own private Clinton email address.

Will Huma show up?

Is she still alive?

Is she still in the United States?

VIDEO : CNN is Worried About “MISSING HUMA” Where is She? 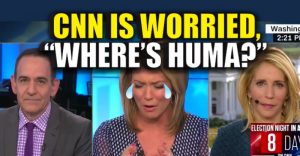 Last Friday the FBI announced they were reopening the email investigation into Hillary’s mishandling of classified information.

In a statement, the FBI said that they discovered 650k emails” pertinent to the earlier investigation on devices belonging to Anthony Weiner and his wife, and Hillary top aide Huma Abedin.

Since that time, no one has seen or heard from Huma.

The “reporters” at the Clinton News Network are worried about Huma.

And with Hillary’s reputation of mass murder, they should be.