Bernie Sanders grasps for the only thing his senile mind can manage to criticize President Trump on with his Address to Congress and low-and-behold its “climate change.”

In Trump’s speech I did not hear one word about climate change – the single biggest threat facing our planet.https://t.co/rVEIsnjKNW

Russia Already Knows Man-Made Climate Change Is a Hoax. Now It’s Time For the West to Wake Up

Climate change is a fanatical western dogma based on fabricated data. And Russia is a proud and unapologetic heretic 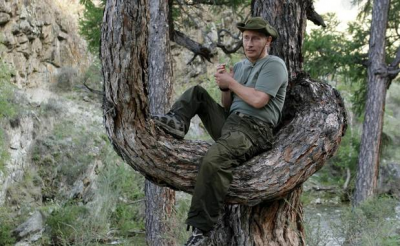 Putin was right. Anthropogenic climate change is based on sloppy science.

It’s becoming more and more difficult to hide the fact that anthropogenic climate change is a hoax based on sloppy science.

Earlier this month, a former top scientist with the National Oceanic and Atmospheric Administration (NOAA) blew the whistle on a key (and fraudulent) climate report issued just before the United Nations’ Climate Change Conference in 2015:

Dr. John Bates, led NOAA’s climate-data records program for ten years and reveals stunning allegations in a lengthy Daily Mail exposé posted February 4. His main charge is that the federal government’s top agency in charge of climate science published a flawed but widely accepted study that was meant to disprove the hiatus in global warming. Bates accuses the study’s lead author, NOAA official Tom Karl, of using unverified data sets, ignoring mandatory agency procedures, and failing to archive evidence — all in a “blatant attempt to intensify the impact” of the paper in advance of the conference.

Dr. Bates proved conclusively what many already assumed back in 2015: That NOAA was fiddling with data in order to make the science fit the agenda. As the Daily Caller reported back in 2015, “National Oceanic and Atmospheric Administration scientists have found a solution to the 15-year ‘pause’ in global warming: They ‘adjusted’ the hiatus.” Bates confirmed it was all bogus.

Dr. Bates’ decision to spill the beans about NOAA’s “scientific methods” was even noticed and applauded by Congress: 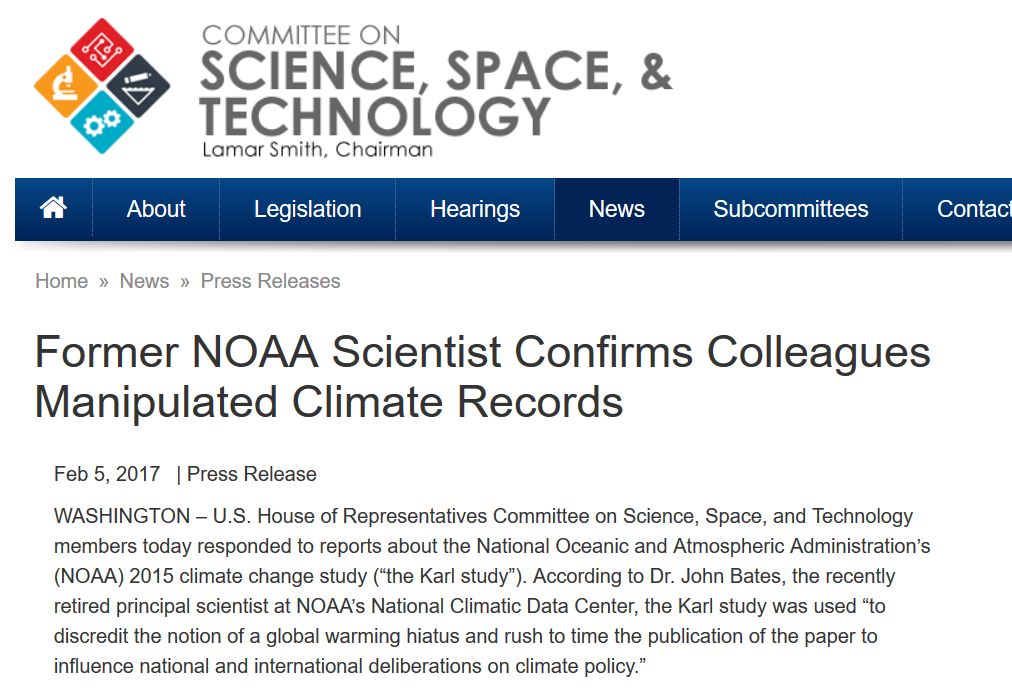 I thank Dr. John Bates for courageously stepping forward to tell the truth about NOAA’s senior officials playing fast and loose with the data in order to meet a politically predetermined conclusion.  In the summer of 2015, whistleblowers alerted the Committee that the Karl study was rushed to publication before underlying data issues were resolved to help influence public debate about the so-called Clean Power Plan and upcoming Paris climate conference.  Since then, the Committee has attempted to obtain information that would shed further light on these allegations, but was obstructed at every turn by the previous administration’s officials.  I repeatedly asked, ‘What does NOAA have to hide?’

They’re hiding a lot. And there’s a clear agenda.

Russia already knows that man-made climate change is a hoax. But it looks like the west is finally starting to catch on.

It’s been widely reported that Putin personally believes that “there is no global warming, that this is a fraud to restrain the industrial development of several countries, including Russia.” (A Putin critic actually told this to the New York Times. It was meant to shock and horrify western news consumers. We think it’s a great quote.)

More recently, Putin stated that challenges “caused by global warming, hurricanes, droughts, floods and other anomalies are [a major] source of economic damage.”

And herein lies the big difference between Moscow and Washington when it comes to climate change: Russia doesn’t think California is going to sink into the ocean. And if it does, it won’t have anything to do with whether or not you drove a hybrid.

The big lie peddled by climate change fanatics is that you are an oil lobbyist if you don’t believe that we are all going to die unless the U.N. implements an eco dictatorship. Moscow isn’t begging to buy carbon credits — the modern eco equivalent of the corrupt Catholic Indulgence system — but it does want to work with the international community to help preserve and protect the environment.

Russia has expressed interest in renewable energies (it’s also just a good idea in a strategic sense) while also dismissing the idea that we’re all about to get washed away by a giant tsunami caused by too many cow farts.

When a group of four climate change “research groups” slammed Russia’s “inadequate” commitment to reducing carbon dioxide emissions, the Kremlin replied with this:

“It is their opinion, it does not reflect anything and is not objective,” Alexander Bedritsky told Reuters, saying Russia would stick to its current plan.

“They can say whatever they want, but our commitments are based on around 70 scenarios of how the climate system will be developing.”

It is unfair to compare the Kremlin’s commitments to those of developed economies such as the United States or European Union member states because Russia is still an economy in transition, he added.

Russia understands that the fear of man-made climate change is being used as a geopolitical weapon to (attempt to) prevent industrialization and modernization among emerging economies. It’s also a great way to get your fearful population to voluntarily forfeit a high standard of living. It’s so nice that Washington cares so much about the polar bears. And thanks for volunteering to only use 1 hour of electricity a day, Joe Lunchpail.

Things are a bit different in Russia.

Moscow is the ultimate climate change troll. When a fleet of Russian warships were spotted off the coast of Australian, Moscow claimed they were “testing their range capability, in case they have to do climate change research in the Antarctic.”

And of course, Putin famously told an international climate conference in 2003 that “global warming” would allow Russians to “spend less on fur coats,” adding that “agricultural specialists say our grain production will increase, and thank God for that.”

The western world is a post-post modern world, in which truth is an abstract social construct invented by the patriarchy. Many westerners — especially the young ones who have college degrees and are not so easily fooled — are devout atheists. They cannot understand how anyone could believe in edicts or warnings of apocalypse decreed by an invisible Yahweh living in the sky. And so they walk the earth, proud and smug that they are not chained to “irrational dogmas”.

Except, of course, that most westerners are deeply religious. Their religion is called “climate change” and if you are not a pious practitioner, you will be found and liquidated. (The lucky heretics are shot into space strapped to an eco-friendly hybrid rocket.)

Well, Russia is a proud and unapologetic heretic.

Yes, we know — 97% of “climate scientists” agree that “climate change” is real. It’s almost as if their entire field of study would cease to exist if they didn’t all agree to take those fat paychecks from the government. Also, that 97% consensus looks suspiciously familiar to a different but also very large percentage which turned out to be extremely made-up.

The heretical nature of daring to have even minor quibbles with the state-sanctioned narrative about man-made climate change has already produced the intended results: People just don’t talk about it. Ever. This allows the True Believers to go unchallenged in the media.

In this way, anyone foolish enough to publicly express doubts about climate change is labeled as a “denier” who intentionally eats dolphin-laced tuna and clubs baby seals to death for sport.

Well, like Luther hammering his 95 tweets to the door of Castle Church in Wittenberg, we have something important to say: Russia already knows man-made climate change is a hoax. It’s time for the west to wake up. 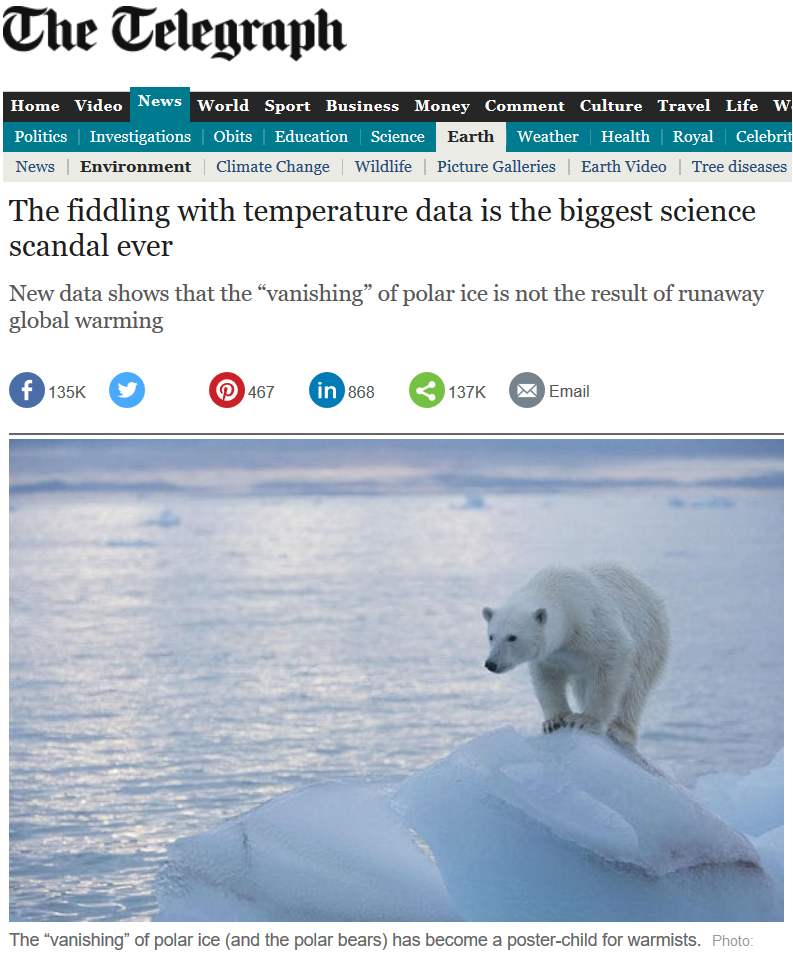 Leonardo DiCaprio is a Complete Idiot

Aren’t you just sick and tired of being lectured about your lifestyle by mega rich celebrities?

Millennials: The Dumbest Generation in History?

Are Millennials the Dumbest Generation in American History? They have the world at their finger tips but do they even have a clue about basic history or common sense? Media analyst Mark Dice has the story.