In the aftermath of the protests that devolved into deadly riots in Washington, D.C. and resulted in the breach of the Capitol building, there is a temptation to stand down and not question any further whether Joe Biden is the duly elected president of the United States.  That question, which is key to preserving our democracy, must not go unanswered, violence or no violence.  We hear claims that what occurred in Washington, D.C. on Wednesday happens only in third-world countries.  Perhaps the more germane question is whether these types of elections are third-world phenomena and fall well short of the integrity we should demand of our election process and the officials who preside over it.

I make no claim that the voting irregularities writ large are of a scope that would change the outcome of the presidential election because I honestly do not know.  But this uncertainty, which I believe that many share, and not just supporters of Donald Trump, is a cancer on the Republic because it strikes at the foundation of our democracy.  If we can’t trust the elections, we can’t trust the politicians who come to power as a result of those elections, and without trust there is no democracy and ultimately there is no country.

The first myth is that patriotism demands that we now stand down in questioning the results of the presidential election.  In fact, the opposite is true.  There are no circumstances in which outstanding, credible questions regarding the integrity of our elections should go unanswered because without ensuring the integrity of our elections, we can have no enduring fidelity to those politicians who emerge victorious from those elections.

The second myth is that there is ample time to study the election results and procedures after Mr. Biden’s inauguration.  But what if the wrong man occupies the Oval Office, one not duly elected by a fair and impartial vote of the American people?  What are the American people supposed to do after the fact?  What is the constitutional procedure for removing a sitting president from office should it be discovered ex post facto that he was the product of a fraudulent election?

The third myth is that a true patriot knows when to stand down even if there are voting irregularities.  The necessary implication is that Mr. Trump is not a patriot because he refuses to go away quietly and simply accept defeat, deserved or otherwise.  I do not doubt that Mr. Trump’s ego plays a prominent role in his challenging the election results.  He does not like to lose.  But there is a much larger issue at play.

It is instructive to recount the 1960 presidential election between the Democrat, John F. Kennedy, and the Republican, Richard M. Nixon.  In the immediate aftermath of that election, Nixon was presented with credible evidence of voting irregularities in Illinois by the Kennedy campaign that could have overturned the results of an election that was decided by a mere one hundred thousand votes.  For the good of the country, Nixon declined to go public with these voting irregularities out of concern that it would throw the country into a constitutional crisis.  Nixon has been lauded for that selfless act, but was it a patriotic decision?

Nixon was known to be far more hawkish on the Russians and a more seasoned statesman than Kennedy.  The Russian premier, Nikita Khrushchev, believed that Kennedy could be manhandled, and the result was the Cuban Missile Crisis, precipitated by the Russians’ attempt to place nuclear warheads a mere 90 miles from our shores.  This was an event of epic proportion that brought the world closer to nuclear Armageddon than ever, before or since.  John Kennedy was credited with peacefully resolving the crisis, but the credit rightfully belongs to his brother, Robert Kennedy, who masterfully worked the backchannels with the Russians.

With Nixon in the Oval Office instead of Kennedy, it is reasonable to believe there would have been no Cuban missile crisis to resolve.  Khrushchev knew Nixon well since he had served as President Eisenhower’s vice president, and the gauntlet would likely never have been thrown down.  So if you believe that the first object of government is to protect the citizenry, was Nixon a true patriot in not challenging the 1960 election?  Did the country have the right man on the job?

Fast-forward to the present day.  The archenemy at the door is no longer the Russians, though they are still a threat, but the Chinese.  Donald Trump is the first president in our history not to kick the can down the road and call out the Chinese for their flagrant violations of international conduct, including theft of intellectual property; foreign trade irregularities; rampant espionage; and criminal conduct with regard to COVID-19 and the death, misery, and economic damage that it has wrought the world over.  The Chinese are the bad actors du jour, and they have been for some time.

Whatever your opinion of Donald Trump, and I fully recognize that not all of them are favorable, he called out the Chinese and identified them as the threat that they pose to this generation and all subsequent generations.  He would have earned my vote for this action alone.  He had the vision and the courage to do what no other president before him was willing to do, and this country is far better off for it.  It may just not know it yet, but it will very soon.

Should Donald Trump just walk away as Richard Nixon did before him and turn the keys to the Oval Office over to Mr. Biden?  Would those be the actions of a true American patriot?  I am not convinced that they would be in light of the alleged financial ties of Mr. Biden’s family to the Chinese.  In another time and place, when journalists recognized their jobs to be objectively reporting the news rather than making the news, even the appearance of such improprieties would have been sufficient to deny Mr. Biden his party’s nomination, much less the presidency.  Even though John Kennedy was the media darling of his era, ties to the Russians (or even the appearance of such ties) would have driven him from the political landscape on a rail.  As a country, we weaken these standards for acceptable conduct on the part of our politicians at our own peril.

I am no apologist for Donald Trump and would be among the first to point out his myriad personal failings, but I am not looking for a Sunday school teacher in our president.  We tried that once with Jimmy Carter, and we know how that turned out.  If that is our litmus test, I submit that there is a long line of past presidents who should have been disqualified as well.

I do not condone the tragic violence that occurred in Washington, D.C. or Mr. Trump’s purported role in fomenting it.  But even the nicest of dogs will bite when you abuse it, and abused Mr. Trump and his supporters have been.  I believe there is reason to question the character of the man who will be inaugurated on January 20 and the integrity of the electoral process that brought him there.  And if you are a true patriot, you should question it, too, because the first object of government is to protect the citizenry. 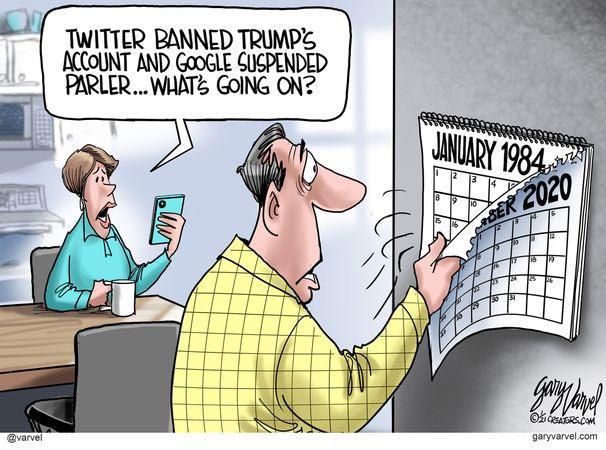