Recently, there was a timeline comic from XKCD about the history of Earth’s temperature over the Holocene which got quite a bit of play, due to the fact that it had the inevitable “hockey stick” splice onto the end. Josh came up with a much less dogmatic and more detailed version, which we covered here.

That led Javier, who is a PhD level scientist in molecular biology and biochemistry who recently published an essay at Dr. Judith Curry’s website here, to come up with a similar but even more technical cartoon. We may have more on his essay later, but for right now I present his excellent timeline cartoon, that includes Earth’s obliquity and temperature over the last 20,000 years. Changes in Earth’s obliquity and thus solar insolation angles is believed to be the main driver of long term climate change, initiating and ending ice ages. As seen in the diagram below, the angle between Earth’s rotational axis and the normal to the plane of its orbit (obliquity) oscillates between 22.1 and 24.5 degrees on a 41,000-year cycle. It is currently 23.44 degrees and decreasing at a rate of about 0.013° per century. 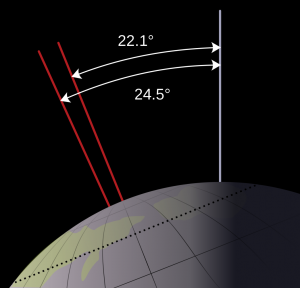 An often-cited 1980 study by Imbrie determined that,

“Ignoring anthropogenic and other possible sources of variation acting at frequencies higher than one cycle per 19,000 years, this model predicts that the long-term cooling trend that began some 6,000 years ago will continue for the next 23,000 years”

With that in mind, have a look at Javier’s cartoon: