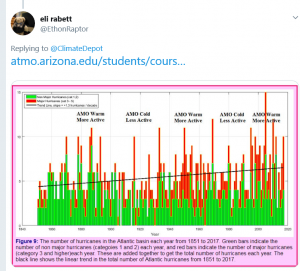 It did not take long for alarmist trolls to react to my hurricane paper.

If Mr Rabett had bothered to read the rest of the Arizona Education factsheet, which he quoted from, he would have found this statement:

What about the trend line in figure 9 above, which indicates that the number of reported Atlantic hurricanes has been increasing at a rate of 1.3 hurricanes per decade? Some have used figures like this to conclude that climate change has caused increasing numbers of Atlantic hurricanes. In reality, the trend can be largely explained by changes in the way we observe hurricanes, rather than a real trend of increasing hurricanes since the 1800s. Long ago, when populations were smaller and there were fewer people making observations, there were undoubtedly storms that were simply missed and not counted. In recent decades, no storm will be missed. Thus, scientists and statisticians need to make adjustments for storms that were completely missed. Another factor is that there has been a large increase in the number of short duration storms in recent decades, where a short duration storm is one that lasts two days or less. Since the beginning of the satellite era, we have significantly improved our observations of hurricanes from space. Short duration storms that went undetected (and uncounted) in the past are more easily detected and counted today. The figure below indicates the increase in short duration Atlantic storms, which is responsible for much of the trend shown in figure 9. The figure below also shows that there has been no significant change in moderate duration storms from 1880 to 2010 after accounting for the long ago missed storms. These results show that the increase in Atlantic storms in figure 9 is an artifact of the way we have observed storms, rather than a real climate change toward more Atlantic hurricanes. 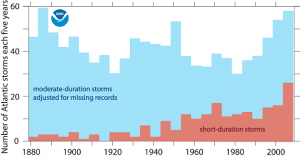 Nowadays all Atlantic storms are constantly monitored by satellite, and hurricane hunter aircraft where appropriate. I wonder how he thinks we used to do it in 1851?

That is why NOAA’s Hurricane Research Division states that reliable Atlantic data only starts in 1966:

Eli Rabett is really Dr Joshua Halpern, who prefers to hide behind a pseudonym, and likes to think he is smarter than the rest of us. If this is the best he can do, he really must try harder in future.

A warmer world could make hurricanes, typhoons and tropical storms more frequent, but the world is not getting warmer at the moment (because of a weak sun).

Imagine if there really was cause for worrie based on the actual data (not counterfeited and adjusted nonsense ..)

Anyway, who would lie about their data if the unadjusted, original measurement and observations really did show there’s a problem?

Thei lie, counterfeit and adjust to make it look like there’s a problem, that’s what activists and criminals does ..

We need an example so you know what I am talking about ..