Kimberly Morin writes that, once again, we are reminded of how incredibly ignorant the left is regarding the history of the Democrat Party.

So of course, it’s our job to inform the masses with the facts. Democrats have always been the party of racism. Not only did they fight against freeing the slaves but they started the KKK and fought against Civil Rights for decades.  It was the Republican Party who literally went to war to free the slaves. Hundreds of thousands of white men died to do this and they weren’t Democrats. Democrats were fighting AGAINST Republicans who wanted to free the slaves.

It was the Republican Party who pushed for Civil Rights to be passed for decades with Democrats filibustering the vote even as late as 1964.

White Republicans were lynched along with blacks by the Democrat-created Ku Klux Klan because they were helping blacks. It was Democrats who put welfare programs into place that have all but destroyed the black community.

It was Democrats who decided they wanted to cull the ‘less desirable races’ by putting Planned Parenthood into black communities. At first it was only for birth control but the abortion rate among black women is extremely high. Planned Parenthood is the only progressive program that has actually worked as intended.

It is Democrats who continue the victimization of blacks by pushing the narrative that they aren’t equal to whites.

Democrats wanted black slaves kept on the plantations. When Republicans fought to give blacks freedom FROM the plantations, Democrats sought other ways to keep the black community down. That’s where the government plantation comes into play.
Not only are black public schools some of the worst in the nation but Democrats keep them that way with their union buddies. Many poor black neighborhoods are crime ridden and filled with single mothers who don’t stand a chance because there aren’t jobs in places where people are afraid to live, never mind work.

Most of these cities are run by Democrats.

If only Democrats cared about history and the truth, it might set them free. If only the black community understood the abuse and oppression they have actually suffered at the hands of Democrats, they too may be set free. Again. 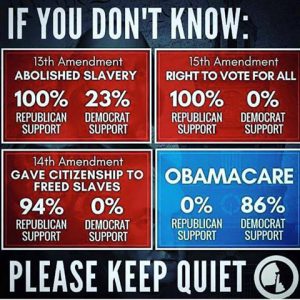