The Endangered Species Act of 1973 was passed to help protect wildlife from extinction, but in subsequent decades, the ESA has been used by radical environmental groups to bully local and state governments into creating policies that significantly curtail the rights of property owners.

One example of this abuse is the treatment of the Mazama pocket gopher in Thurston County, Washington. In 2014, the U.S. Fish and Wildlife Service classified three subspecies of the gopher as threatened, thus spurring far-reaching protections under the Endangered Species Act.

In May, The Heartland Institute, where this reporter also works as executive editor, reported officials in Thurston County have been requiring landowners wishing to develop their property to first determine whether their soil is suitable gopher habitat.

“If so, inspectors must make multiple site reviews between June 1 and October 31, when gophers are most active, to determine whether any gophers are present,” wrote reporter Michael McGrady for The Heartland Institute.

If inspectors determine gophers could be present on a landowner’s property, the landowner is then required to take significant steps to protect the gophers from any potential harm.

“In one case, because inspectors discovered a single mound of dirt indicating the possible presence of gophers on an eight-acre parcel of land during a site review, Steve and Deborah McLain have been unable to get a permit to build a home on their property for more than a year, despite offering to cede the acre surrounding the mound as protected gopher habitat,” McGrady reported.

Some officials in Thurston County have called for the creation of a “gopher tax” landowners would have to pay to build in locations where gophers are likely living. The tax, which would be about $42,000 per property, would reportedly be used to help build protected habitat for gophers in other parts of the county. 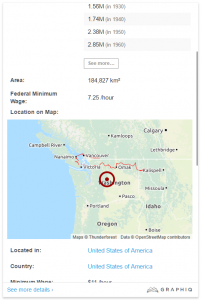 At least one business has paid millions to build on its own property in an effort to comply with the gopher protections. Fox News reported in April it’s taken Kaufman Real Estate several years and more than $3 million to obtain the proper permits to develop 77 acres of land in Thurston County.

According to Thurston County Commissioner Gary Edwards, these policies hurt middle-income and lower-income people the most.

“The rich can continue to function and live anywhere they want, but the poorer folks, the people out there working for a living, can’t,” Edwards said, according to Fox News.