A new 19km bridge connecting the mainland with the Crimean Peninsula has been officially opened, making Russia the host of Europe’s longest bridge. President Vladimir Putin personally drove a truck across it to mark the occasion.

The opening of the bridge was all about the people, who created the massive construction in record time. A column of dozens of heavy-duty vehicles including hauler trucks, construction cranes and cement-mixers buzzed along, occasionally tooting their horns. Putin, who showed up for the ceremonial trip unusually dressed in casual style, drove one of the two Kamaz trucks in the front of the motorcade. His usual entourage was literally sidelined, keeping at a distance on the other half of the road.

The column arrived to the Crimean side of the bridge, where Putin spoke a few ‘thank you’ words to the thousands of people who contributed to the project – from underwater explosives specialists, who helped sweep the seabed for bombs left from World War II, and archeologists to the many construction workers who made the bridge possible.

“10,000 people work at this construction site, 15,000 during peak load. Almost 220 companies were involved. In fact, the entire country worked on it. The result is wonderful. It makes Crimea and the legendary Sevastopol stronger and brings us all closer together,” he said.

The bridge has two parts – one for automobile traffic, which is opening this week, and one for trains – which is to be finished next year. For several more months, trucks will not be allowed through, giving extra time to check all the safety measures and engineering quality. The parade of heavy vehicles on Tuesday apparently aims at dispersing any speculation about the strength of the bridge.

A direct path connecting the Crimean Peninsula to the Krasnodar region on mainland Russia is a significant achievement. Building one was considered as early as the late 19th century. The invading Nazi Germany started constructing a bridge, but the project was cut short by advancing Soviet Union.

The soviets went as far as erecting a bridge themselves, but it quickly failed due to difficult seabed terrain and harsh winter weather. Eventually a ferry connection was deemed a more viable alternative. In modern times Russia and Ukraine were trying to negotiate a joint project to create a bridge with modern technology, but it didn’t take off.

Tables turned in 2014, when an armed coup in Kiev put a fiercely anti-Russian government in power in Ukraine. Frightened by threats of nationalist pogroms and a rollback of autonomy, the predominantly Russian population of Crimea voted in a referendum to break up from Ukraine and ask Russia to take the peninsula back as part of the country, which Moscow did. Kiev responded by trying to isolate the region, disrupting supplies of freshwater and electricity and restricting travel to Crimea.

The Crimean bridge project was Russia’s response to the situation – a permanent overland link between the peninsula and the rest of the country. The work on the project started in 2015 in parallel with creating necessary infrastructure on both sides of the Kerch Strait.

In 2016, the actual work on the bridge started in earnest, with workers building temporary constructions and driving pillars into the seabed. Year 2017 was marked by arguably the trickiest part of the construction – towing, rising and putting in place two arches under which ships can pass. The steel constructions weighted 6,000 tons and 5,500 tons for the railroad and automobile parts of the bridge respectively.

Previously the title of Europe’s longest bridge was held by the Vasco da Gama Bridge in Portugal, which has a total length of over 12km. Trailing shortly behind it is the Lezíria Bridge located in the same country. European bridges however pale before their Asian counterparts. The world’s longest bridge is a 164.8km monster connecting China’s cities of Danyang and Kunshan, which opened in 2010. 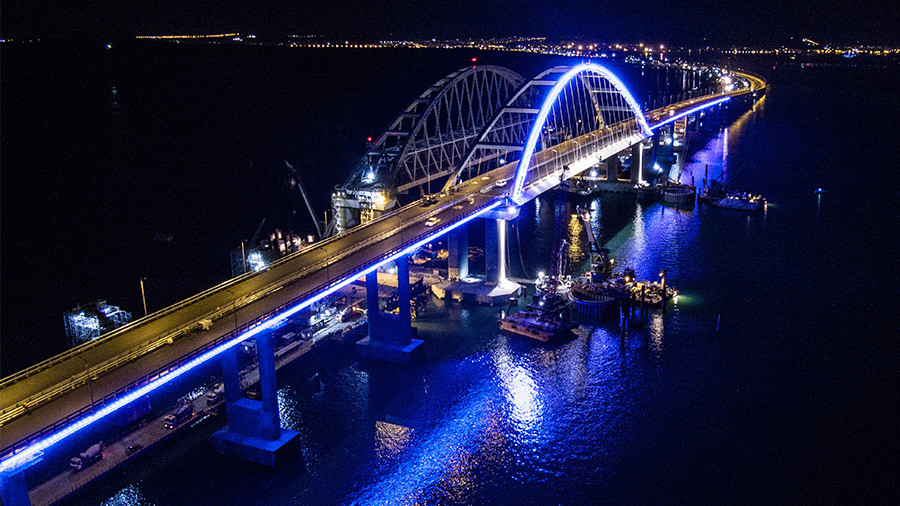 The 5,500-ton highway arch of the Crimean Bridge lit up the night sky with deep blue. The massive bridge connecting the Crimean Peninsula with mainland Russia is set to open later in May, six months ahead of schedule.

The bridge’s lighting system was just recently tested and the illumination will be in full operation after the railway section of the bridge is complete. The bridge will be lit in the colors of the Russian flag. The highway arch will be blue, the railway arch red, and the bridge’ support constructions will be white.

The spectacular structure has two separate parts, one for trains, which is due to be opened in 2019, and another for cars, which will have four lanes.

When opened, the 19-km bridge will be the longest in Europe, leaving Portugal’s Vasco da Gama Bridge (12.3km) far behind.

READ MORE: Crimean bridge will open to car traffic in May, well ahead of schedule

Construction began in May 2015, a year after Crimea overwhelmingly voted to reunite with Russia in a referendum. The link is vital due to the peninsula only having a land border with Ukraine, and currently can only be reached from Russia by direct flights and ferries.

The bridge is expected to service at least 14 million passengers and to allow the transportation of at least 13 million tons of cargo per year.