In just twenty-four hours, more than 200 earthquakes have been recorded near the Salton Sea in California.

The frequency of earthquakes occurring in this swarm of activity surpasses the other three times such dramatic activity has been recorded around the Sea since sensors were installed in the area in 1932.

This is truly history-making activity.

The San Andreas fault’s southernmost stretch has not ruptured since about 1680 – more than 330 years ago, scientists estimate.  And a big earthquake happens on average in this area once every 15 or 200 years, so experts think the region is long overdue for a major quake.

The swarm of activity recorded near the Salton Sea this week may mean that a major quake–or, “megaquake,” as it’s called by experts–is ready to shake up southern California.

“Any time there is significant seismic activity in the vicinity of the San Andreas fault, we seismologists get nervous,” said Thomas H. Jordan, director of the Southern California Earthquake Center, “because we recognize that the probability of having a large earthquake goes up.”

As seismic activity drops, the probability of having a large earthquake also decreases.  Experts said it’s important to understand that the chance of the swarm triggering a big one, while small, was real.

“This is close enough to be in that worry zone,” seismologist Lucy Jones said of the location of the earthquake swarm. “It’s a part of California that the seismologists all watch.” 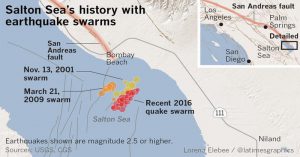 The recent surge of activity is an indicator that catastrophe might be lurking just around the corner.