We salute this principled female chess champion who did the right thing by refusing to wear an oppressive hijab as a touring professional just to pander to irrational local customs.

This is a post for those who don’t understand why I am boycotting FIDE’s decision.

I think it’s unacceptable to host a WOMEN’S World Championship in a place where women do not have basic fundamental rights and are treated as second-class citizens. 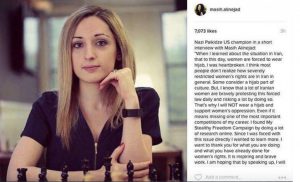