Democrat nominee Hillary Clinton’s first presidential forum happened Wednesday, this time on the issue of national security and military readiness. It didn’t take her long to be absolutely ripped apart by a former Navy vet who was disgusted by how she handled classified information. According to Fox News, the vet was one of the questioners at NBC’s Commander In Chief Forum (hosted by reported former Clinton Foundation member Matt Lauer, just in case you were wondering whether objectivity mattered in any way to the boys at the peacock network).

However much they may have tried to tip the scales for Clinton, however, one former naval officer stopped any attempt to make things easy for the former secretary of state when he asked his question. “As a naval flight officer, I held a top secret sensitive compartmentalized information clearance,” the vet began. “That provided me access to materials and information highly sensitive to our war fighting capabilities.

I am sure most of you now know about what went down, if not, read the whole story and watch the video here ..

After reading and watching above story, i have this comment: How come Comey was able to find emails marked with a “C”? The emails that was marked with a heading, those are the ones that are deleted. The reason the emails marked with a “C” wasn’t deleted was because the 600 staffers deleting the emails DIDN’T KNOW! Because they didn’t have security clearance and training – they didn’t know how to handle security. In the video she said she used a separate email-system for secret and confidential emails, she didn’t, State Department had less than 1% of her emails in their system. Now, how can you be Secretary of State for 4 years and not be sending and receiving classified information? 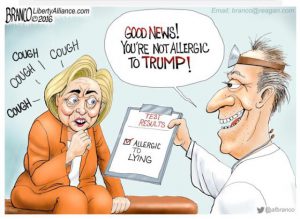