After detaining and interrogating the wrong suspect, the German police have finally identified whom they believe to be the assailant in the terrorist attack that took place this past Monday.

During a search of the truck used to carry out the attack, police found identification papers belonging to a Tunisian migrant named Anis Amri. Photos have been released to the public through the German media. 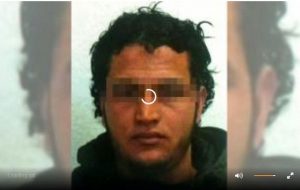 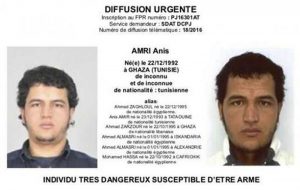 The 23-year-old suspect’s documents were found inside the cab of the truck used to mow down civilians at the market, and he was identified as Anis Amri, though it was believed he had several other aliases, officials said. Die Welt, along with most other German media outlets, published photos of the suspect. The manhunt took a new focus after police determined on Tuesday that a Pakistani migrant intially detained after the horrific attack, for which ISIS has claimed credit, proved to be innocent.

He arrived in Germany in July 2015 as an asylum-seeker and was considered part of the “Salafist-Islamist scene” by authorities. Amri spent some time in pre-deportation detention in Germany after his asylum application was rejected in June 2016, said Stephan Mayer, a senior lawmaker with Germany’s governing conservatives.

He was registered in an asylum-seekers’ hostel, however, he was known to move around a lot, Der Spiegel reported. At some point earlier this year, authorities classified Amri as a “potential threat.”

Amri is also believed to be a follower of the top Islamic State leader in Germany, Abu Walaa (who was recently arrested).

As a part of the manhunt, hospitals are being scoured looking for Amri, as he is believed to have sustained some sort of injuries during the attack.

It is believed that the attack was inspired by the Islamic State.

ISIS claimed “a soldier of the Islamic State carried out the attack in response to calls for targeting citizens of the Crusader coalition.” The attack, which mirrored the ghastly massacre in Nice over the summer, appeared to follow several of the terror group’s online guides for committing acts of terror using vehicles.

At this point, German police are not yet confirming if one or more suspects are sought; only Amri’s identity has been released, though there may be collaborators. Police are also searching for a handgun allegedly used to kill a Polish truck driver.

The manhunt is now well-under way.