Germany is at risk of tacitly joining Donald Trump in turning its back on the Paris climate change deal. Two of the country’s regional governments have decided to put preserving jobs in coal mines and power plants ahead of cutting carbon emissions.

If Europe’s largest economy misses its targets, Chancellor Angela Merkel’s environmental credentials – and the global accord itself – would suffer a big setback.

Officially, Germany is fully committed to the Paris accord. At the G20 summit in Hamburg earlier this month, Merkel said she “deplored” Trump’s decision to withdraw the United States from the treaty. She led an alliance of world leaders who unsuccessfully tried to persuade the U.S. President to reconsider.

Yet two important German states are undermining Merkel’s position. North Rhine-Westphalia (NRW) and Brandenburg are home to many mines which extract brown coal and power plants that burn the carbon-intensive fuel. Their governments have vowed to protect an industry that provides more than 70,000 jobs, many of them in economically deprived regions in the country’s east.

That’s bad news for Germany’s promise to reduce overall emissions by at least 55 percent, relative to 1990, by 2030. Per unit of electricity generated, brown coal produces twice as much carbon as gas-fired power plants. In 2016, the fuel accounted for 23 percent of Germany’s electricity but emitted 50 percent of the sector’s carbon dioxide. Brown coal reserves are expected to last for several decades, and utilities even have permission to open several new mines.

NRW’s new government, which is led by Merkel’s conservative Christian Democratic Union, in late June decided to stick to the current mining plans in the region. In mid-June, Brandenburg’s government said it wanted to soften its 2030 reduction targets. A study commissioned by the World Wildlife Fund environmental group shows that NRW’s plans alone would bust Germany’s Paris targets.

Unless Merkel can rein in the brown coal enthusiasts at home, she risks sending a devastating message to the world. If a country as rich and ecologically conscious as Germany prioritises coal mining jobs over the fight against global warming, others will also find it easier to turn their back on the treaty. 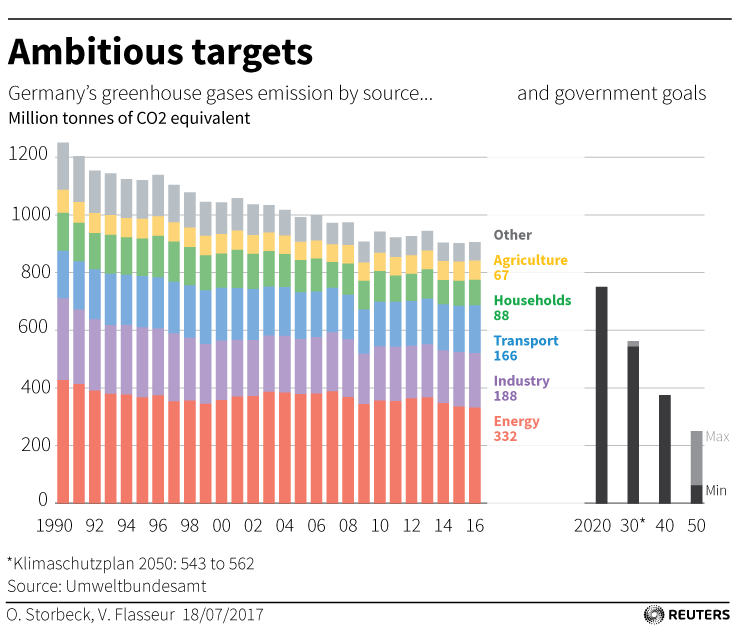