But that doesn’t exist …

Greta Thunberg and those who “condone her alarmist nonsense” are tragically destroying young people, according to Sky News host Alan Jones.

“We have learned that vulnerable students have fallen through the cracks over coronavirus,” he said.

“We have been told that schools don’t have a proper review process to prevent – a frightening term – suicide clusters.

“Young people are constantly comparing themselves to others on social media and suffering mental health problems as a result.”

Mr Jones said there is “two blunt answers” as to how this crisis has “accelerated to this point”.

“The first is an appalling absence of political leadership,” he said.

“But young people are being confronted by uninformed, disinformed, illiterate and often innumerate protest leaders urging young people to march for causes they don’t understand based on arguments that can’t be proven and trading on fear which is destructive.

“Why have leaders in the western world given international exposure to the uninformed and disinformed utterances of Greta Thunberg?”

Greta Thunberg’s “dishonest, alarmist rubbish” is now seeing its manifestation in massive emotional and psychological instability in young people, according to Mr Jones.

“It is a farce; a sickening farce.” 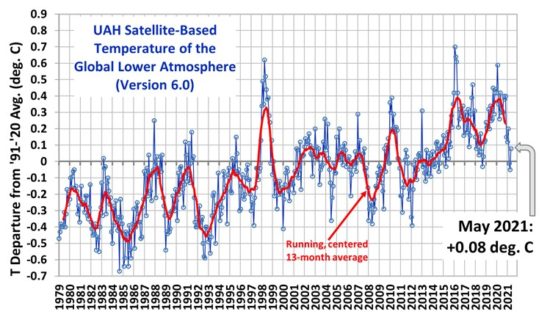 That means there’s been no warming for 85 years, or for 24 years if we use the satellite data …

The question is: How much of this non increasing, or non existing warming is Man Made, causing both climate change and climate crisis??

Exceptional Snowfall –the Biggest in over two Decades– Pummels Patagonia

How Much CO2 Is In A Raindrop? The Ocean? The Air?