From Harvard and the “timing is everything” department comes this “models gone wild” projection that’s sure to upset zealots who think climate change is affecting the election NOW. Oh, wait, in the Hottest Year Ever™, climate change isn’t even mentioned in the presidential debates, and comes in dead last in U.N. worldwide polling.

Climate change: Voters will be hot under the collar by 2099

Harvard study of 1.5 billion votes is the first to project how climate change will impact democratic elections

By 2099 the nature of democratic politics could change in costly ways for politicians because of climate change, says Nick Obradovich of Harvard University in a paper in Springer’s journal Climatic Change. Leveraging a century’s worth of political science research, he predicts that voters’ disgruntlement about the societal effects of climatic extremes and weather-related disasters they experience will translate into more frequent turnover of political parties elected in and out of office, and will keep politicians of especially warmer, poorer countries more on their toes than is currently the case. 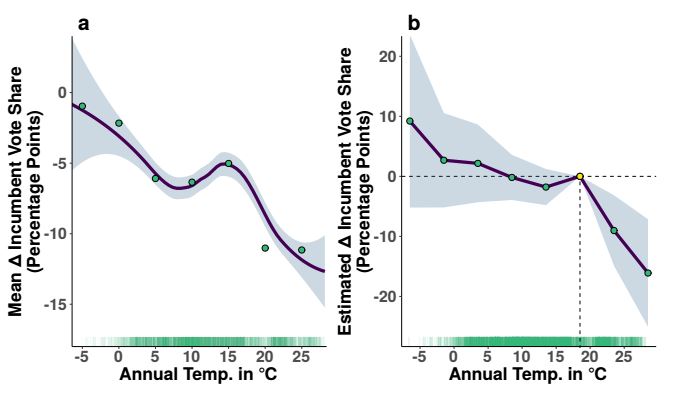 The analysis indicates that – once you control for all other place-specific factors like political institutions and levels of economic development – warmer than normal temperatures in the year prior to an election produce lower vote shares for parties already in power, driving quicker rates of political turnover. These effects are even more acute in areas with annual temperatures above 21 degrees Celsius (or 70 degrees Fahrenheit). In these warmer places, voter support shrinks by nine percentage points from one election to the next, relative to office bearers in cooler electoral districts. Using these historical effects, Obradovich forecasts that by 2099 climate change (when temperatures are expected to have risen by up to five degrees Celsius) may reduce the average vote share of office-bearing parties, especially in poorer, already warmer countries.

According to Obradovich, turnover directly related to politician performance is vital to a well-functioning democracy. He notes, however, that findings from the study indicate that democratic turnover might increase as a result of climatic events that are outside the control of individual politicians.

“Such exogenously driven political turnover may shorten democratic time horizons, inducing parties and their politicians to focus on short-run policies at the expense of important longer-run strategies,” he warns. “Such altered political time horizons may have a particularly deleterious impact on climate mitigation, as the long-run benefits of mitigation are unlikely to be observed from one election to the next.”

Obradovich adds that the uncertainty caused by increasing rates of democratic turnover can in turn directly upset macroeconomic outcomes on a broader scale.

The PDF of the paper is here: https://wpsa.research.pdx.edu/papers/docs/climate_voting_wpsa_obradovich.pdf