The rest of the island, and all of Hawaii, remains warm if somewhat wet, with heavy rains in some areas that have caused flash flooding.

“The grounds are already saturated now, so it doesn’t take much,” Foster said.

The snow at the peak of Mauna Loa is not uncommon because it is so high, nearly 14,000 feet.

“As long as we have deep enough clouds to support ice crystals, and when you have cold enough temperatures at the summit level, you can get snowfall,” said Foster.

Mauna Loa and its sister peak of Mauna Kea are both volcanos. Mauna Kea is the highest point in the state of Hawaii.

Snow on the peaks is not uncommon in the colder months of the year, though deep snow is rare.

The only other area of Hawaii that gets snow with any regularity is the Haleakalā volcano on Maui, which at about 10,000 feet gets snow once every five years or so, he said. 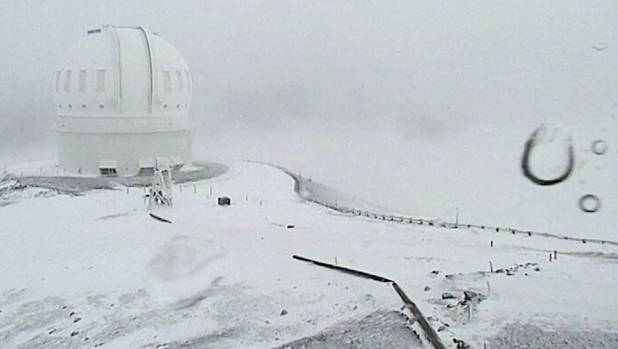 Another 30cm of snow could fall on Monday (NZT) on Hawaii’s highest mountain peaks, on top of the 60cm already dumped there since Friday.

The summits of Mauna Loa and Mauna Kea on the Big Island are set to remain under a winter whiteout throughout Monday, America’s national weather service says.

Hawaii receives 3 feet of snow drifting to 5 feet on the peaks of the Big Island. Last year in 2014 saw smaller amounts but snow, it seems its a pattern, and increasing. Fog Dome in Wales, Fog Falls in Wales also, plus records cold to shatter records across Canada and the USA.