No, I’m not writing an article to punch back at  your supporters Hillary. If I’m being honest, I used to support Barack Obama. I used to watch Jon Leibowitz and Stephen Colbert religiously. I even used to think man-made climate change was a thing. It’s embarrassing to admit all that, but I’m also fully aware of how easy is to be indoctrinated by the media when you fail to research the propaganda they’re feeding you.

This is an article about you, Hillary Clinton, the most self-serving deplorable human being ever to run for President of the United States. Do you think that’s unfair? Is it misogynistic to point out that 70% of Americans think you’re a liar? That’s actually incredible considering how much time the media spends projecting your dishonesty on Donald Trump.

Let’s just get to the sh*t show you call a career in public service and I’ll stop when my ADHD kicks in.

Let’s talk about the audacity for you to question the character of American citizens. Do you remember landing under sniper fire in Bosnia you raving sociopath?

Let’s talk about the first time you became aware of the term “Gold Star Family”. That was during a meeting with your staff of hyenas when they first proposed setting a trap for Trump by using Khizr Khan, the Muslim father of a fallen soldier, at your convention.

For everyone following along, Khizr Khan runs a “pay for play” Muslim immigration scheme in Washington DC. He deleted his firm’s website in a panic shortly after Breitbart uncovered it. He also wrote a paper advocating the supremacy of Islamic Law over “man-made” Western Law. Islamic Law includes the death penalty for homosexuals and requires a woman to provide four witnesses before she can accuse a man of rape.

You didn’t want them to know that did you, Hillary? You put an Islamic supremacist and his Sharia-compliant wife on stage to wave around our U.S. Constitution so you could score a political point. What Khizr Khan failed to mention are the multiple terror attacks U.S. Muslim service members have carried out against their fellow soldiers. He failed to mention the multiple active and veteran U.S. Muslim soldiers, in the past two years, who’ve been arrested for plotting attacks and trying to join ISIS . We’ll come back to my completely justified bigotry of Islam.

Let’s talk about who really insulted Gold Star families. We’ll put aside the fact that you let four Americans die in Benghazi. You went to the coffin ceremony at Andrews Air Force base and lied to the faces of parents of fallen Navy SEAL’s while they grieved for the loss of their sons. You lied to their faces.

Now, I understand these people are just pawns to you, but Navy SEAL’s are my real life superheroes. I can’t even talk about these men without getting choked up. They represent the best of us and you lied to the people they love while standing over their caskets.

You shouldn’t be allowed to step foot on American soil, let alone run for President.

Of course, you didn’t just lie to them, you lied to the faces of every citizen in America. You have your friends at the Washington Post and New York Times trying to convince us to “stop talking about your damn emails”, but it’s not going away.

You’ve been lying to the faces of American citizens your entire career. You embody everything we hate about politicians. You stand for nothing but yourself and you’ll say anything to gain power.

Yesterday you called us misogynists. Hillary, the loudest people ripping you apart on twitter every day, are women. 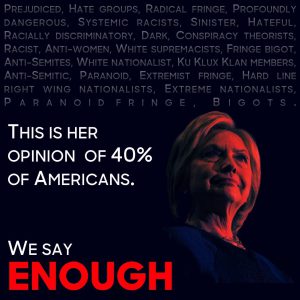