Hillary Clinton issued a statement that she “regrets” saying half of Donald Trump supporters are “deplorable” — but she stopped short of apologizing for her comment.

“Last night I was ‘grossly generalistic,’ and that’s never a good idea. I regret saying ‘half’ — that was wrong,” Clinton said in a lengthy statement. But she added, “I won’t stop calling out bigotry and racist rhetoric in this campaign.” 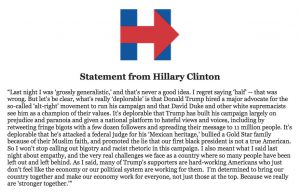 Read the whole story at Breitbart ..

Does she mean it, or is this written by her 600 staffers while her doctor is ministering her and her medicine?