While Donald Trump has been consolidating his base of support, the opposite appears to be happening for Democratic nominee Hillary Clinton, who seems to be hemorrhaging supporters from her progressive base.

Clinton’s long-running rift with the progressive left has been a vulnerability for her throughout her campaign — dating back to the Democratic primary.

Yet, in the closing days of the 2016 campaign, the rift has been laid bare through a combination of WikiLeaks revelations, a series of high-profile endorsements for Green Party presidential nominee Jill Stein from progressives like Marc Lamont Hill, Cornel West, and Susan Sarandon, as well as polling data that suggests Trump’s broad populist messaging is resonating with Democrat-leaning voters.

Contrary to the narrative perpetuated by corporate media, many prominent liberals are now expressing their belief that installing Hillary Clinton, a “corporatist hawk,” in the White House is “the true danger” and would be “more dangerous” for progressive values, the well-being of the nation, and the stability of the world than would four years of a Donald Trump presidency.

Recent reports have captured Clinton’s schism from her progressive base — highlighted, in part, by Trump’s decision to close the final days of the 2016 election season by campaigning in traditionally blue states like Michigan, Colorado, and Pennsylvania.

On Sunday, Marc Lamont Hill — who endorsed Stein in August — urged progressives to reject the establishment’s “fearmongering” and the “campaign of terror” being waged by the Democratic Party and to instead vote their conscience by supporting Stein.

The distinguished professor of African American studies at Morehouse college and New York Times best-selling author explained that making the short-term “political sacrifice” of four years of Donald Trump in the White House is a small price to pay to for the long-term goal of setting “the groundwork to imagine a new world, a new politics, and a new order.”

Hill explained that Hillary Clinton is a “neoliberal” who is “committed to using war as the primary instrument of foreign policy” and is unwilling “eliminate gross forms of militarization around the world.”

“We can afford to lose an election; we can’t afford to lose our values,” Hill explained during an August interview with Power 105.1’s the Breakfast Club. “I would rather have Trump be president for four years and build a real left-wing movement that can get us what we deserve as a people, than to let Hillary be president and we stay locked in the same space where we don’t get what we want.”

I’m not scared of Trump. I’m scared of us as a country moving in the wrong direction… I have very l little trust in what Democratic party is doing. And I worry we’re investing so much faith in them out of fear… They’re essentially saying, “If you don’t vote for us, then you’re going to have Donald Trump and your life will be ruined.” If you frame that as the choice, you never get to demand what you actually deserve and what you actually want.

Hill explained that the Democratic Party, now relying on a campaign of fear to pressure progressives to vote Clinton, is the same Democratic party that launched “a campaign of dirty tricks, lies, misrepresentations and outright just egregious acts of unethical behavior” in order to “pus[h] Bernie [Sanders] out and marginaliz[e]” Sanders’s progressive message.

On Saturday, rapper and vocal Sanders supporter, Killer Mike, took to Instagram to tell black voters to “stay the f*ck home” if politicians on the ballot do not represent their views on certain political issues.

“Black Voters in states like Georgia this is your chance to MAKE A DEMAND and have it met! Don’t remain a pasty [sic] and pet simply doing what u are told. Get something for your vote or stop complaining and accept your role as a 2cd Class citizen once and for all,” Killer Mike wrote.

“If you’re voting for Trump or Hillary Clinton, you’re voting for the same thing,” Killer Mike told TMZ in August after Sanders had lost the Democratic primary. While Killer Mike did not indicate who he was voting for at that time, he explained that, “We had one candidate this year — who had a strong chance of winning — who was anti-growing war, and that was Sanders, and we didn’t vote him in, so we’re getting what we asked for… We’re asking for more war. And if you don’t want any war, you’d be voting Jill Stein.” 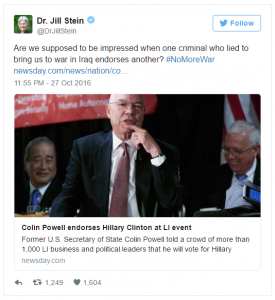 At a Saturday campaign rally for Clinton, the president of Iowa State University’s chapter of Students for Bernie, Kaleb Vanfosson, took to the stage and excoriated Clinton, telling rally attendees not to vote for her as the liberal crowd cheered him on.

“She is so trapped in the world of the elite that she has completely lost grip on what it’s like to be an average person,” Vanfosson continued. “She doesn’t care. Voting for another lesser of two evils, there’s no point.”

Earlier this week, Dave Chappelle blasted Clinton’s integrity during a set at The Cutting Room in New York City.

“On Friday night, he shocked the crowd with a 60-minute set largely devoted to slamming Hillary Clinton,” the Observer reported in a piece titled, “Dave Chappelle Defends Trump, Rips Clinton, ‘She’s Not Right and We All Know It.’” Chappelle said he “didn’t feel good” about voting for Clinton. “She’s going to be on a coin someday. And her behavior has not been coin-worthy,” Chappelle reportedly said.

“Fear of Donald Trump is not enough for me to support Clinton, with her record of corruption,” Sarandon wrote in a letter announcing her decision to endorse of Stein. “Now that Trump is self-destructing, I feel even those in swing states have the opportunity to vote their conscience.”

Sarandon listed nearly a dozen reasons why she could not support Clinton, including the fact that Clinton “supports TPP” and “takes lobbyists money for campaigning.”

Sarandon has denounced Clinton repeatedly throughout the campaign and has said that she believes a President Clinton’s hawkishness and “moral judgement” is “more dangerous” than a President Trump.

“I’m more afraid of actually Hillary Clinton’s war record and her hawkishness than I am of building a wall,” Sarandon said back in April.

“She did not learn a thing from Iraq. She is an interventionist. She’s done horrible things, horrible things, and very callously,” Sarandon said in June. “I don’t know if she’s overcompensating or what her trip is. I think we’ll be in Iran in two seconds. That scares me. That frightens me… [I] know what her policies are… [I] know where she’s taking money from.”