When a plan begins to fail, you either reconsider the plan or double-down by resorting to earlier successful actions.

The climate change argument is failing as evidence shows the science is wrong, all forecasts fail, polls show lack of public concern and the Paris Climate Conference Agreement is collapsing.

However, there is a bigger reason why it all fails:

There was no problem in the first place.

As I said years ago, “The Kyoto Protocol is a political solution to a non-existent problem without scientific justification.”

Emails leaked from the Climatic Research Unit (CRU) in 2009 exposed the corrupt science and forced a Kyoto replacement, the Green Climate Fund.

It is now failing, so they double down. Political and financial reward is at stake and the global warming lie is too big to fail.

Worse, the lie is based on another lie that chlorofluorocarbons (CFCs) were destroying the ozone layer.

Desperate to make people think they are acting on climate change ,and the Paris Agreement is working, they resurrect the Montreal Protocol. This was created to eliminate CFCs but the plan only appeared to work. There is no hole in the ozone, even at its thinnest, which occurs in winter when there is no sunlight; it is one-third the global average.

The term was created to scare people: “We’ve torn a hole in the sky, and harmful radiation will give children skin cancer!”

I appeared before the Parliamentary Committee on Ozone. It was a political circus. Friends of the Earth had representatives there with no scientific knowledge; I asked them. A scientist showed graphs of ozone levels over Toronto. He didn’t tell the politicians it was computer model data because there was no real data then. The politicians didn’t know, and that caused me to change my presentation.

I explained the scientific method of creating a hypothesis, then testing it by trying to disprove it. It is easy to discredit a theory because the hypothesis is based on stated assumptions. Show one is wrong, and the hypothesis collapses.

Ozone is created by the ultraviolet (UV) light portion of sunlight hitting free oxygen (O2) in the atmosphere. They assumed the level of UV radiation is constant. In fact, it varies widely and is the major cause of ozone variation, but that’s what allowed them to focus on and blame CFCs.

Dupont, who produced the CFCs, said nothing. They created them as an inert, harmless gas to replace ammonia, the problematic refrigerant gas. I talked to some of them. They knew the science was bad. Their silence was likely because the patent on CFCs was expiring and they had a replacement anyway, called hydrochlorofluorcarbons (HCFC).

There was no empirical evidence that CFCs were destroying the ozone, just like there is no empirical evidence that CO2 is causing warming or climate change. The similarity between the deceptions comes about because the same people were involved. They were bureaucrats like Susan Solomon, a bureaucratic scientist at NOAA who was contributing author to the IPCC Third Assessment Report (2001) and co-chair of Working Group I (the Physical Science Report of the Fourth Assessment Report (2007). Ms Solomon was the source of claims that CFCs were destroying ozone in the ozone layer.

They claim that a reduction in HFCs will reduce global warming and would reduce cumulative global consumption of HFCs by the equivalent of 700 million metric tons of carbon dioxide through 2025. That is about 1.5 per cent of the world’s 2010 greenhouse gas emissions, or the same as taking 15 million cars off the road for 10 years.

These estimates are completely wrong.

They’re based on what is called the global warming potential (GWP) of HFCs. These are calculated assuming CO2 stays in the atmosphere for 100 years. Figure 1 shows the IPCC figure against the real value of approximately six years calculated by many researchers. 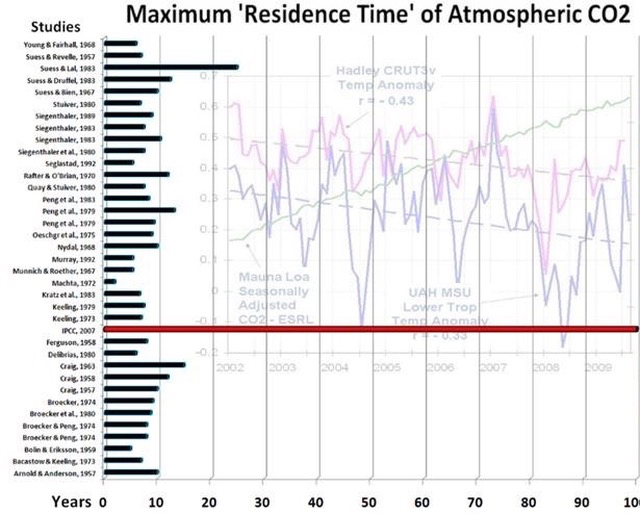 As Lawrence Solomon explained in his book “The Deniers”:

“The IPCC chose to assume CO2 remained in the atmosphere for up to 100 years (red bar in graph). If a shorter residence time was assumed, the IPCC climate models would not be able to predict the accelerated warming that is hypothesized to be caused by human CO2 emissions.”

Some developing countries (specifically India, Pakistan, Iran, Iraq and the Gulf states) will not freeze their use of HFCs until 2028. China, the world’s largest producer of HFCs, will not actually start to cut their production or use until 2029.

Even if Canada reduces HFCs totally, imagine how much more goes into the atmosphere from automobiles and refrigerators as the Indian and Chinese economies grow.

Sadly, our leaders are unilateral fools.

However, the ultimate irony is that CO2 is a likely major replacement refrigerant contender.