Hundreds of scientists and policy experts sent a letter to President Donald Trump asking him to withdraw from a major United Nations environmental treaty ratified during the Bush administration.

More than 300 eminent scientists signed the letter to Trump, delivered Thursday, arguing he should pull out of the UN Convention on Climate Change (UNFCCC) because it targets carbon dioxide — a gas essential for life.

CO2 “is not a pollutant but a major benefit to agriculture and other life on Earth,” reads the petition, obtained by The Daily Caller News Foundation. “Observations since the UNFCCC was written 25 years ago show that warming from increased atmospheric CO2 will be benign — much less than initial model predictions.”

Trump promised to pull out of the Paris agreement on global warming, which went into effect in November 2016. President Barack Obama signed the U.S. up to cut greenhouse gases 26 to 28 percent.

The hundreds of scientists who signed the letter, however, argue that’s not far enough. Trump should pull out of the foundational treaty the Paris agreement is based on — the UNFCCC.

The UNFCCC’s focus on global warming is misguided because it targets CO2, which isn’t a pollutant, with the idea reducing it can stop global warming. Their plans aren’t supported by science, one petitioner argued in a letter.

“Since 2009, the US and other governments have undertaken actions with respect to global climate that are not scientifically justified and that already have, and will continue to cause serious social and economic harm—with no environmental benefits,” reads a separate letter written by Richard Lindzen, a climatologist at the Massachusetts Institute of Technology (MIT).

“While we support effective, affordable, reasonable and direct controls on conventional environmental pollutants, carbon dioxide is not a pollutant,” Lindzen wrote in his letter, supplementing the petition.

“To the contrary, there is clear evidence that increased atmospheric carbon dioxide is environmentally helpful to food crops and other plants that nourish all life. It is plant food, not poison,” Lindzen wrote.

Increasingly, scientists are finding the world has actually greened in the past few decades largely due to increased CO2 emissions into the atmosphere. CO2 fertilization is even greening some of the world’s most arid regions.

It’s not clear when Trump plans on withdrawing from the Paris agreement, but some sources say executive orders on the matter could be coming in the next few weeks.

Obama never brought the Paris agreement before the Senate for ratification, so Trump can treat it as an executive agreement, rather than a treaty, and pull out without congressional consent.

Pulling out of the UNFCCC may be trickier. The Senate ratified the UNFCCC in 1992, and there’s not a ton of legal precedent on what the procedure would be for withdrawing from such a treaty.

The petition from Lindzen and others comes just two months after a group of 800 scientists called on Trump to stay party to the Paris agreement. Those scientists claim pulling out of Paris would “undermine our best chance to avoid dangerous climate change.”

“The United States will lose its seat of influence at the international negotiating table, and will cede to China, the EU, and other countries its authority as a political, technological, and moral leader,” scientist wrote to Trump in December. 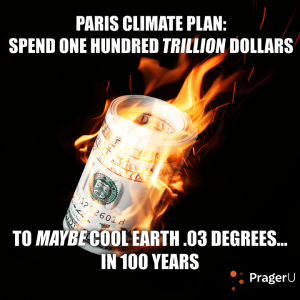 .. but at least a lot of activists will get rich.

Scientists faking their government-funded research and defrauding taxpayers are drastically increasing in number, and a major federal agency has no idea how much of its $7 billion investment is lost to such misconduct, waste or theft, The Daily Caller News Foundation Investigative Group has learned.

The National Science Foundation (NSF) funds research projects to the tune of $7 billion in taxpayer funds every year, but officials there don’t estimate how much goes to cheaters who manipulate data, plagiarize and steal public money.

“We don’t generally speculate about how much misconduct is undetected,” NSF spokesman Bobbie Mixon told TheDCNF.

The cases include researchers who falsified data, plagiarized other work, spent NSF money on personal expenses, invented fictitious employees, used taxpayer dollars for online gambling, and much, much more. Some researchers saw jail time for their misdeeds, while others made genuine mistakes – which still threatened or wasted taxpayer dollars.

And, like NSF, the IG also doesn’t actually know how much waste there may be in any given year, though investigators believe there is a lot of it.

The IG generally doesn’t “speculate about how much misconduct is undetected,” IG spokeswoman Susan Carnohan told TheDCNF. Consequently, there’s no estimate detailing how much of the NSF’s $7 billion goes into researchers’ pockets or funds plagiarism and data manipulation. The problem is growing drastically and is harming the scientific community and the public’s trust.

The IG has seen “a substantial increase” in misconduct and fraud cases, the watchdog reported in September, 2016. Investigators caught twice as many students falsifying their results during the 2011 to 2016 period as compared to the six years prior.

“The significant number of substantiated allegations of research misconduct investigated by [the IG] continues unabated,” the watchdog wrote. The IG report cited a survey that found 30 percent of researchers admitted “to engaging in questionable research practices or knowing someone” who does.

“Encouraging the ethical conduct of research” is one of NSF’s top challenges, the report said.

“As more stories about research misconduct circulate in the media, the public’s confidence in the research community as a whole is weakened and taxpayer support of science is undermined.”

Carnohan added: “Research misconduct damages the scientific enterprise, is a potential misuse of public funds and undermines the trust of citizens in government-funded research.”

“NSF officials disregarded recommended sanctions against some of the scientists and academics implicated in those findings,” The Washington Free Beacon reported. “Though many were temporarily barred from receiving additional federal funding, nearly all will be eligible for taxpayer support and official roles in NSF-funded research in the future.”

It’s also difficult to put a price on the known misconduct, since the IG frequently doesn’t list how much money was wasted or saved after it caught cheaters and fraudsters. The watchdog only reports such losses and recoveries in 35 of the 74 cases TheDCNF reviewed.

Investigations saved or recovered nearly $8.7 million and identified another $9.3 million lost to waste and fraud, according to the reports published by Government Attic, though the IG did not note how much of the amounts identified were returned to the government.

One case alone accounted for $9.1 million of the waste. A university – whose name was redacted – “misused” funds related to 11 NSF awards. The matter was settled out of court, but the amount paid back to the government was redacted.

In fact, most of the cases were redacted and contained varying levels of information. The scientists and the names of institutions – which were frequently universities – were always redacted, even when individuals received convictions.

One researcher was caught trying to use NSF funds to pay for personal charges, such as “patio furniture, cell phones and a rental apartment,” a report said.

Another scientist “falsified data in three publications, each since retracted,” a second report said. The researcher was banned from receiving NSF funds for three years.

The IG referred one investigation to the university that employed a researcher who committed plagiarism in two requests for NSF funds. But the watchdog found the university’s subsequent report was either inaccurate or incomplete and had to prove the willful plagiarism.