Image: Are mileage fees a means of control?

No referendum has been held about climate policies anywhere in the world, why??

Why do they not wish, or dare to ask the constituents for a mandate to implement their far reaching, mind boggling expensive policies .. There hasn’t even been a honest, open and objective debate.

We all know why, this isn’t about climate at all, it’s about money, power, the great reset, depopulation, control and Communism.

Thirty years after the IPCC’s first report and despite yearly UN climate conferences it is now beyond doubt that renewable energy policies have failed to halt or slow the relentless rise in global CO2 emissions.

In the wake of the publication today of the IPCC’s 6 Assessment Report (AR6), the UK government, like many around the world, will face growing calls to “do more” to reduce emissions of greenhouse gases.

In truth, many governments, and the UK is a clear example, are already trying extremely hard to reduce emissions. They are spending very heavily on emissions reduction technologies, mostly on renewable energy.

Income support subsidies to renewables in the UK alone cost consumers over £10 billion a year, a total that is still rising.

However, these policies have only destroyed industry in the West and exported production and their CO2 emissions to areas still using low-cost fossil fuels, such as China.

The conclusion is obvious. Climate policies are failing not because of a lack of political will, but because the technologies selected are extortionately expensive and ineffective, and are already stimulating public resistance. 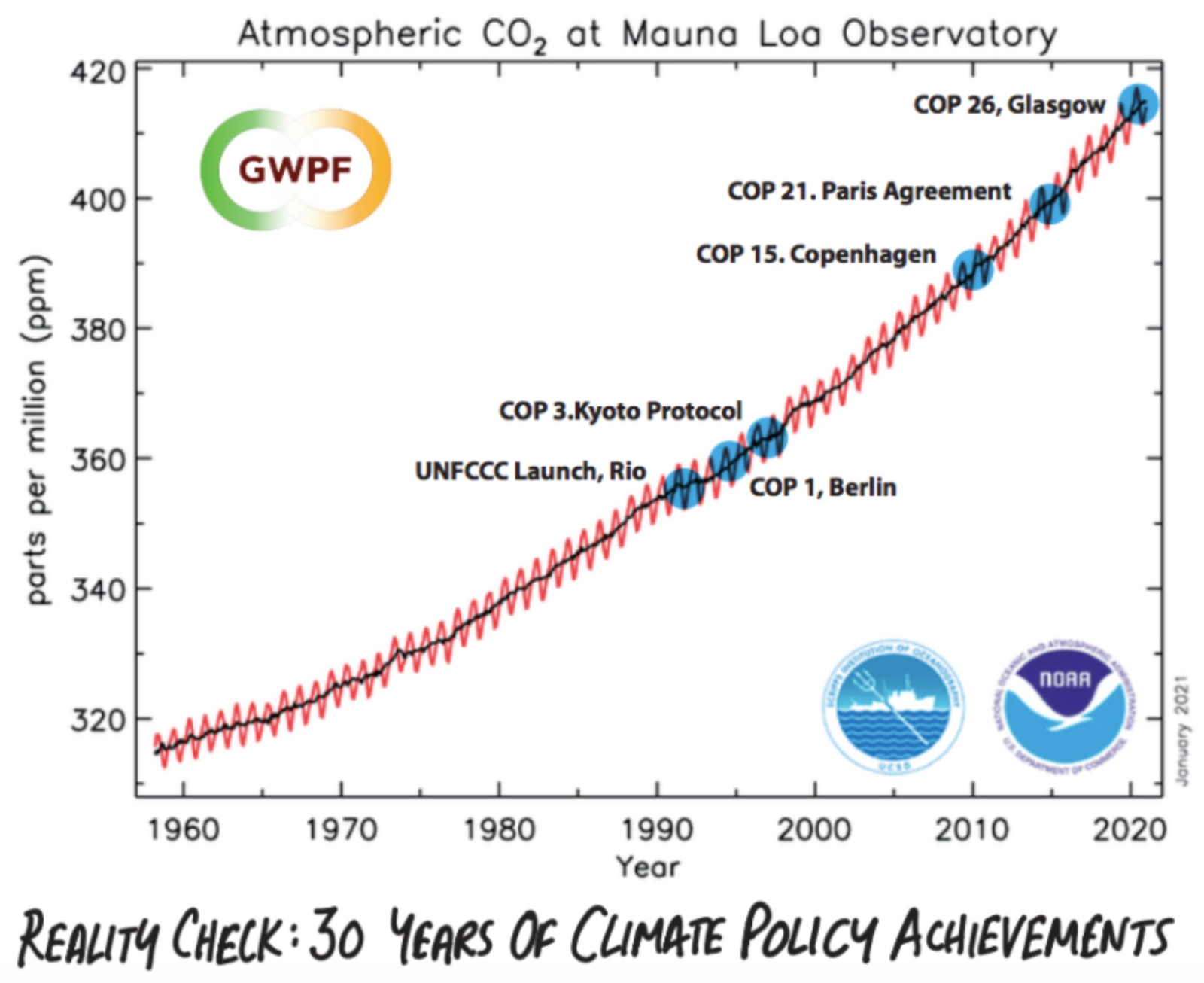 The gilets jaunes protests in France were an early sign and the recent anti-carbon tax referendum in Switzerland was the latest manifestation. The fierce public push-back against Boris Johnson’s attempt to ban gas boilers in the UK is another.

As the current political turmoil in Downing Street shows, there will be more to come, not least because industry salesmen and government analysts, such as the Committee on Climate Change have repeatedly misled politicians about the true cost of their favored emissions reductions technologies, hugely expensive wind farms and solar panels.

Sometimes these costs have been deliberately hidden. Last week, the Committee on Climate Change was ordered by the Information Tribunal to release its previously concealed cost estimates for the target of Net-Zero emissions by 2050.

But in spite of attempts to hide the costs, the truth is becoming more widely known, and the Prime Minister is currently in political difficulties over his climate plans because of increasing concern amongst Conservative backbenchers that they are on the verge of widespread public revolt.

Mr. Johnson has a choice. He has to decide whether he wishes to sacrifice substantive action on climate change, as well his own political future, in order to support the failing renewables industry.

Assuming that he wishes to leave a positive political legacy he must show real leadership by abandoning ineffective and unreliable renewables and following sound engineering and economic advice on cheaper paths to emissions reduction.

This alternative pathway is obvious. The natural gas and nuclear route have long been known to experts as the most practical means of reducing emissions, a view summarised in a recent GWPF paper, The Workable Alternative to Net-Zero.

“Decades of childish and misconceived green policies have done nothing to reduce global CO2 emissions and have only succeeded in stirring up intense public resistance. We are constantly told to do ‘more’, but more of the same will be disastrous. Renewables are futile, ineffective, and have no future. Gas and nuclear have to be fast-tracked if there is any chance of publicly acceptable, long-term climate policies.”

Back in the real, empirical world: