It never ceases to amaze me that any country in the Middle East — in this case Iran — continues to poke the United States in the eye expecting the Trump administration to roll over and expose itself as vulnerable.

Gen. Alireza Tangsiri of the Iranian National Guards navy is the latest to make the bold gesture just daring America to react by claiming the Iranian navy has taken control of the Strait of Hormuz, the area’s major shipping route in the Persian Gulf.

Roughly 20 percent of the world’s oil passes through The Strait of Hormuz, according to Fox News, which has long been a target of the Iranians.

Iran has, in the past, threatened to block the route as American-Iranian relations break down.

Iran has suggested it could use its military to block other countries from shipping their oil exports while U.S. sanctions are designed to halt Iran’s oil sales. U.S. ships patrol the Persian Gulf specifically to protect oil shipments and allow them to leave the area safely.

In July the two nations squared off in a verbal throw-down over “an offensive of speeches and online communications meant to foment unrest and help pressure Iran to end its nuclear program and its support of militant groups,” as reported by Reuters.

Iranian President Rouhani retaliated by saying the U.S. risks the “mother of all wars” with Iran.

As a result of the continuing verbal discourse, Iran initiated a naval exercise deploying more than 100 vessels to the Strait of Hormuz in a show of strength, sending a message to the U.S.

Fox News contributor Walid Phares points out that while the Iranians have the necessary capability to initiate all the exercises they want, the question remains: How far will they actually carry out the threats?

“They are going to do the actual exercise. The question is how far will they go?” Phares said. “Will they actually block the Strait or not. Now, the Iranians can if they want, damage the international passage, but we all know the United States can intercept them, stop them and damage their own capacity. So its kind a breakmanship capacity of gaming with us. And I think the United States is very much attentive to what they are doing and will respond if Iran will cross that red line.”

However, Iran may believe it has support from surrounding nations to force the hand of the Americans.

“Let’s look at it from the Iranian perspective,” Phrares said. “Their economy is getting strike after strike. In their view, with the demonstrations taking place inside their country, they are collapsing slow-motion. So this could be an injection so the international community would say ‘Oh no! We don’t want any problems.’ Especially who, the gulf nations are just across and they are very concerned about any Iranian actions, not the United States. So this is a very daring game by the Iranians thinking they could force negotiations. I’m not thinking this administration will buy that.”

Pompeo: ‘The Islamic Republic of Iran Does Not Control the Strait of Hormuz’ 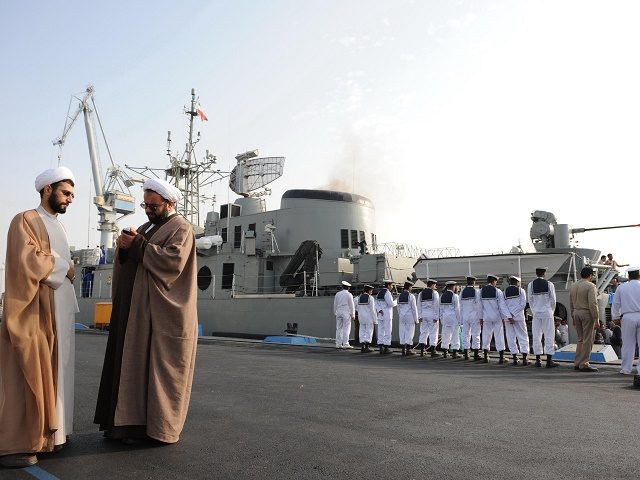 Secretary of State Mike Pompeo on Monday evening dismissed Iran’s claim to control the Strait of Hormuz and the entire Persian Gulf. Pompeo promised that the United States would continue to protect freedom of navigation in those international waterways.

Iran, reeling under sanctions pressure from the U.S. and unable to persuade Europe to rescue its tottering economy, resorted to its time-honored tactic of threatening to close the Strait of Hormuz on Monday. Iranian leaders argued that if the U.S. effectively shuts down Iranian oil exports with an even tougher round of sanctions in November, then no one else should be allowed to move oil through the Persian Gulf.

About 18 million barrels of oil pass through the Strait of Hormuz every day, accounting for over 30 percent of all oil shipments by sea, so a blockade would be tantamount to hitting world energy markets with a weapon of mass destruction. Even a temporary disruption in shipping would inflict billions of dollars in damage upon the rest of the world.

The Iranian military staged a major naval drill at the beginning of August intended to demonstrate their ability to “swarm” the straits with small boats that could interdict shipping. The commander of the Islamic Revolutionary Guard Corps navy declared on Monday that Iran has “full command over the Persian Gulf.”

Pompeo dismissed this belligerent claim with a tweet on Monday evening:

Retired Admiral James Stavridis, formerly supreme allied commander of NATO, told CNBC on Monday that Iran could temporarily block the Strait of Hormuz, but the U.S. Navy would swiftly clear the blockade. He warned the threat of constant Iranian terrorist attacks against shipping would be more of a long-term problem than an outright brigade.