Tucker Carlson interviewed Attorney General Jeff Sessions, beginning with a question as to why neither the Attorney General or anyone on his staff had discussed providing a supplement to the Senate in order to avoid the problems that General Flynn had.

Sessions replied that the question put to him by Sen. Franken was regarding a specific report that “various surrogates” of the Trump campaign were meeting continually with Russian officials. That was the question he responded to. The earlier meeting as a function of his normal Senate duties didn’t come to mind. The AG points out that during that meeting, two independent, non-partisan military aides were also in attendance with him at all times.

The only two times the Attorney General recalls meeting the Ambassador was the meeting in his office and another time they mingled after he had given a speech at the Republican convention. In neither instance did he discuss anything to do with the campaign.

Carlson asks Attorney General Sessions why he recused himself and he explains that it was a process that was already underway, an analysis of whether it was appropriate or not, which was something he had made a commitment to the Senate to do during his confirmation hearings. That process was just wrapping up coincidentally as all of this was media frenzy was taking place.

Carlson asks AG Sessions if the campaign believed that the Russians had a preference for President Trump over Clinton, which he responded that he’s never been told that and that he’s got no idea, recommending that Carlson direct his question to the Russians.

Tucker tries to elicit a response from Sessions to a question of whether or not there is any evidence of Russian meddling based upon the assumption that there must be in order to justify the investigation. Sessions was to sly to fall for that one. He refers him back to what is being reported in the paper and the ongoing investigation by Congressional intelligence and other committees.  He says, “That’ll just have to play out.”

The Attorney General takes a few moments to explain to the audience that there is nothing wrong with a Senator meeting with ambassadors, particularly one on the foreign relations committee. John McCain and Lindsey Graham travel to the Middle East and meet with terrorists, nobody questions the propriety of that because they’re establishment tools closely aligned with the Democrats.

He was asked if he would agree with the President’s characterization of the actions against him as a witch hunt. The Attorney General chose to characterize what was being said as overhyped beyond reason and unfair. That’s pretty much a diplomatic yes any way you slice it. Obviously, that’s just another of the many instances where Jeff Sessions is right.

The vast majority of Republicans and the Trump administration are standing strongly behind Attorney General Jeff Sessions in the midst of a disgusting political witch hunt.

However, there are a few snakes in the grass attempting to stupidly side with the liberal media propaganda machine and Democrats against Sessions.

Jeff Sessions is an honest man. He did not say anything wrong. He could have stated his response more accurately, but it was clearly not intentional. This whole narrative is a way of saving face for Democrats losing an election that everyone thought they were supposed to win.

The Democrats are overplaying their hand. They lost the election and now, they have lost their grip on reality. The real story is all of the illegal leaks of classified and other information. It is a total witch hunt! 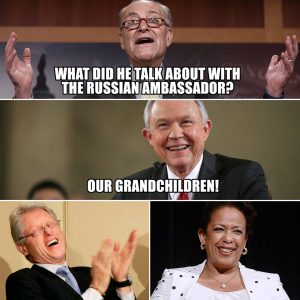 The Deep State War on Trump

The real story behind the Russia hysteria.