With the tenacity of a pitbull, Keilar seized on reports that Trump, as then-owner of the Miss Teen USA pageant, reportedly ventured into the dressing rooms of competitors while they were in various stages of undress. In what bordered on a hostile interview, the CNN host was relentless in trying to get Conway to respond to the reports.

Trump’s campaign manager did her best to shift the focus back on the 2016 election and Hillary Clinton, and stressed that the media never wants to talk about far more egregious actions by Bill Clinton.

“We never want to talk to the women shamed and blamed by Hillary Clinton because they had sexual contact with her husband,” Conway said.

But like a dog on a bone, Keilar was not to be denied.

She summarily dismissed claims of sexual misconduct leveled against former President Bill Clinton as being “exaggerated,” with Conway pointing out this proved her point that CNN and other media sources never want to talk about these incidents.

Score one for Conway.

But she wasn’t done, calling out the network for going after ratings instead of talking about the issues that are important to the American voter, to include women. And while the media will not portray it that way, Conway did a great job of turning the tables on Keilar.

Keilar responded with what amounted to an all out assault on Donald Trump, further validating Conway’s position.

“When does Donald Trump stop saying things like Hillary Clinton has to go to jail? He brings these things up himself,” she pushed back. “You’re saying this should be discussed. Why doesn’t he make a pivot? Why doesn’t he talk more seriously as a candidate about the issues and not upstage himself?”

Again we see the team of criminals failing, as they FAIL EVERY SINGLE TIME! This time of age, with the social media and internet, you will be caught if you lie. For crooked Hillary and her team of criminals to continue lying despite that fact should tell us, seriously, she is not fit to lead anything. I even doubt they will trust her of her be running the cell block in prison when she gets there, we’ll see .. Nah, who am i kidding, i couldn’t care less! 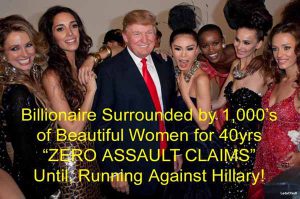