City workers walk across London Bridge with the Shard in the background into the City of London on March 2, 2017. Britain’s Finance minister Philip Hammond earlier this week said he would keep chopping away at the deficit to get Britain fit to face Brexit, as he prepares to deliver his budget on March 8. Daniel Sorabji/AFP/Getty Images.

Metropolitan Police have declared the attacks at London Bridge and Borough Market Saturday as terrorist attacks.

At 0025hrs 4/6/17 the incidents at #LondonBridge & #BoroughMarket were declared as terrorist incidents.

Moments earlier, Prime Minister Theresa May released a statement, saying the van incident on London Bridge in which pedestrians were mowed down is being treated as a possible act of terror.

“Following updates from police and security officials, I can confirm that the terrible incident in London is being treated as a potential act of terrorism,” May said in a statement.

“This is a fast moving investigation,” May added. “I want to express my huge gratitude to the police and emergency services who are on the scene. Our thoughts are with those who are caught up in these dreadful events.”

The number of pedestrians mowed down on the London Bridge is still unclear, as some reports like The Daily Mail place the figure at 20, while the BBC says the number is much lower at five or six. However, one thing the police are clear about is that there are “multiple” fatalities.

The Islamic State has not claimed responsibility, but many ISIS-supporting accounts on Twitter have applauded the events at London Bridge and the reported stabbings at Borough Market.

May is set to chair an emergency response committee on Sunday. A spokesman for May said she is being fully updated by officials as events unfold.

The world watches London as they are under several terror attacks, we can’t help but remember when the Muslim mayor of London said “terrorism” was just part of “urban life.”

During a trip to New York, Sadiq Khan, the Muslim mayor of London told Americans that terror attacks are part of urban life.

That’s a very liberal mindset, to roll over and accept that the enemy will attack you.

We must reject terror attacks in any part of life by calling out the enemy, doing away with dangerous political correctness, and rejecting multicultural globalism.

Embracing the America First philosophy, where you place the needs of Americans above foreign interests is another key facet to fighting radical Islamic terrorism.

On a trip to New York City, London’s Muslim Mayor Sadiq Khan has said terror attacks are “part and parcel” of urban life, just hours after an Islamic terrorist bombed the city.

Mr. Khan also seized the opportunity to launch an explicit attack on the Brexit vote and rise of Republican presidential candidate Donald Trump. He compared to two movements, claiming they are both driven by “scapegoating”.

“All these problems will not be solved by voting to leave the EU or voting for – I don’t want to name the candidate – a president of the USA,” he said.

He said that he and Bill de Blasio, the Mayor of New York, “believe in building bridges rather than walls” and that there are leaders “who address people’s concerns” and others “who play on people’s fears”.

The London Mayor joked that he “shouldn’t really get involved in the American elections”, but added: “I hope the best candidate wins – I’m sure she will”, repeating his endorsement of Hillary Clinton which he first made in Chicago last week.

The two left-wing mayors, of London and New York, were speaking at an event called ‘Building Progressive, Inclusive Cities’ in New York. It is the second time the men have met, after coming together before at the Labour party conference in Britain last year.

Earlier on Sunday, Mr. Khan had spoken at a “meeting for Muslim community leaders” where he also addressed the attacks.

“It is a reality I’m afraid that London, New York, other major cities around the world have got to be prepared for these sorts of things,” he said, the Evening Standard reports.

.. and who’d forget this grain of gold: 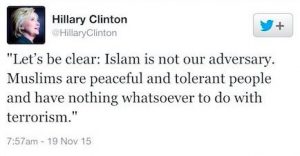 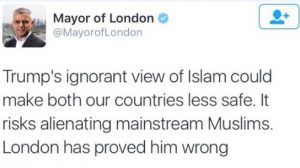 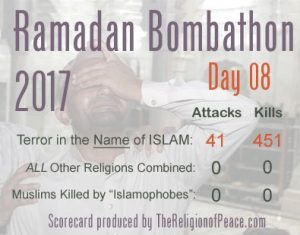 The Nazi-lefts incompetence and S T U P I D I T Y is dangerous!!

Khan called global warming “one of the biggest risks to humanity” and pledged to work with other cities to meet the goals of the Paris Agreement, which is to keep future global warming below 2 degrees Celsius. Trump announced U.S. withdrawal Thursday.

Climate change remains one the biggest risks to humanity. Now more than ever world leaders must recognise and act on this threat. pic.twitter.com/ZKc3crHLTs

European leaders were also heavily critical of Trump for pulling out of the Paris accord, including U.K. Prime Minister Theresa May.

European leaders pressed Trump on the climate deal at the G7 summit in May, but Trump mainly wanted to talk about fighting terrorism and other issues, not global warming.

Two days later and Khan is faced with two attacks near London Bridge that have been declared terrorist attacks by British authorities.

A white van plowed into about 20 people Saturday on London Bridge shortly after 10 p.m., possibly killing and injuring pedestrians. A group of at least three men armed with knives then attacked people in Borough Market about 80 yards south of the bridge.

British police declared that the two incidents were terror attacks early Sunday morning. Few details have been released regarding any casualties or the attackers.

The London attacks came about two weeks after a suicide bomber killed 22 people and dozens more were injured in Manchester just outside the lobby of an Ariana Grande concert. Young children were among the dead, and the Islamic State took credit for the deadly attack.

Grande is scheduled to hold a benefit concert in Manchester Sunday.

My statement on the cowardly terrorist attack in London tonight: https://t.co/7GYYdImIU8
Please continue to follow @metpoliceuk for updates pic.twitter.com/xxTbH2o2JN

Sorry Sadiq Khan, your FAKE sympathy doesn’t impress anyone. This is your 1st. “religion” (climate swindle is the second), this is what over 30% of muslims supports.